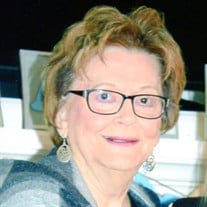 Barbara J. Cima, age 76, of Paducah, KY, formerly of West Frankfort, IL, passed away peacefully with her family by her side, at 10:07 p.m. on Tuesday, June 6, 2017, in Barnes-Jewish Hospital of St. Louis, MO. She was a long time resident of West Frankfort until her and her husband, Richard, moved to the Paducah, KY area in 2005 to be near her family. She was born in Carterville, IL, on Saturday, August 17, 1940, the daughter of John Franklin and Helen Louise (Impson) Proffitt. Barbara attended school in Herrin, IL and was a graduate of Herrin High School Class of 1958. She continued with her education at Southern Illinois University of Carbondale, IL. She was united in marriage to Don Richard Cima on Saturday, June 6, 1959, in Herrin, and together they shared over 47 years of marriage until his death on Saturday, February 4, 2006. Barbara remained at home early in her life to manage her home and to see to the needs of husband and four children. After her children were older, she began her long working career as a Respiratory Therapist at the UMWA Union Hospital of West Frankfort until her retirement. She loved her job and every day looked forward going to work to help others. Before moving to the Paducah area she was an active member of the First Baptist Church of West Frankfort. She loved singing in the choir, her Sunday school class, and being involved in many other activities of the church. After moving to the Paducah area she became a member of Reidland Baptist Church. In her spare time she enjoyed working in her yard and flowers, crocheting, and traveling. Her family was a very important part of her life, and she was always interested in all of their many activities, especially those of her grandchildren. She enjoyed the many times they gathered together, and the many memories that have been created will now be cherished by those she leaves behind. She is survived by two daughters and one son-in-law, Cyndi and Rev. Dr. Larry T. Lewis of Evansville, IN and Stephanie Cima of Marion, IL; two sons and daughters-in-law, Jeff and Lauralyn Cima of Marion, IL and Steve and Marilyn Cima of Paducah, KY; nine grandchildren, Lauren Lewis Ray and her husband Jason of Calvert City, KY, Caitlin Lewis DeVore and her husband Joey of Louisville, KY, Hannah Lewis of Indianapolis, IN, Devyn Cima of Oxford, MS, Derek Cima, Connor Cima and Tyler Cima all of Marion, IL, Abigail Cima and Alec Cima both of Paducah, KY; three great grandchildren, CeCelia and Brody Ray both of Calvert City, KY and Cooper DeVore of Louisville, KY, other extended family and many friends. She was preceded in death by her parents, husband, and two sisters, Judy Yagow and Janet Sauer. Arrangements for Barbara J. Cima were entrusted to Stone Funeral Home, 1201 East Poplar St., West Frankfort, IL. The time of the visitation was from 10:00 a.m. until 1:00 p.m. on Monday, June 12, 2017, at the funeral home. Following the time of visitation the funeral service was at 1:00 p.m. with Barbara’s son-in-law, Rev. Dr. Larry T. Lewis presiding. The prelude and postlude musical selections were presented by pianist Becky Brown. Special vocal musical selections presented during the service were “It Is Well with My Soul” and “Beulah Land” both by Becky Brown who accompanied herself on the piano and “The River” by Rev. Dr. Larry T. Lewis with recorded accompaniment. Barbara’s good friend, Sylvia Tharp, presented comments of memory during the time of service. Interment followed next to her husband, Richard, in the Masonic & Odd Fellows Cemetery of Benton, IL. Those serving as pallbearers were Derek Cima, Connor Cima, Tyler Cima, Joey DeVore, Jason Ray, Larry Collins, and honorary pallbearer, Alec Cima An acappella version of “What a Day That Will Be” was presented at the graveside committal service by Rev. Dr. Larry T. Lewis. For those who preferred, memorial contributions were made to either or both “American Heart Association” or “ASPCA” (American Society for the Prevention of the Cruelty to Animals) and mailed in care of Stone Funeral Home, 1201 East Poplar St., West Frankfort, IL 62896. Memorial envelopes were available at the funeral home. For additional information please contact the funeral home by calling 618-932-2161.

Barbara J. Cima, age 76, of Paducah, KY, formerly of West Frankfort, IL, passed away peacefully with her family by her side, at 10:07 p.m. on Tuesday, June 6, 2017, in Barnes-Jewish Hospital of St. Louis, MO. She was a long time resident of... View Obituary & Service Information

The family of Barbara J. Cima created this Life Tributes page to make it easy to share your memories.

Send flowers to the Cima family.