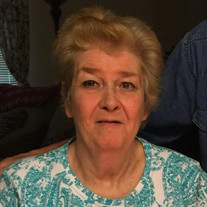 Barbara Ann Sargent, age 74, of West Frankfort, IL passed away peacefully at 10:47 a.m. on Friday, July 21, 2017, in the Helia Health Care Center of West Frankfort. She was born on Sunday, June 6, 1943, in Christopher, IL, the daughter of Charles and Mary Elizabeth (Rea) Sharp. In the mid 1940’s after her father returned home from the war, Barbara’s family moved to the Sharp Family Farm located east of West Frankfort, near the new West Frankfort City Lake. She attended school in Thompsonville, IL. Barbara was first united in marriage to Jack R. McReynolds in West Frankfort in August of 1960, and this union was blessed with four children; Eddie Ray, William Franklin “Bill”, Mary Ann and Johnny Lee. She later was united in marriage to John Edward Sargent on Monday, November 7, 1983, near Thompsonville, IL and together they have shared nearly thirty four years of marriage. Most of her working career was as a cook in many of the areas restaurants with the last being at Lola’s Restaurant in West Frankfort until her health forced her to retire in 1998. She was of the Baptist faith. In her spare time she enjoyed fishing and loved working with her flowers and plants. Her family was a very important part of her life and would always be interested in all of their many activities. She would always enjoy the many times they would gather together and the many memories that have been created will now be cherished by those she leaves behind. She is survived by her husband, John E. Sargent of West Frankfort; six children, Ed R. McReynolds and his wife Teddie of East Alton, IL, Mary Ann Gosney and John L. McReynolds and his wife Michelle all of West Frankfort, Sandy Lynn Sargent of Carterville, IL, David Sargent and his wife April and Kathy Jo Ulmer and her husband Germane all of Herrin, IL; grandchildren, Nathan Ray McReynolds of West Frankfort, Tyler McReynolds and his significant other Michelle Wofford of Granite City, IL and Brandon McReynolds of West Frankfort, and Abbey McReynolds of East Alton, IL, Quentin Sullivan and his companion Kelsey Sheedy and Stephanie Gosney all of West Frankfort, Josh McReynolds and Ashley McReynolds and her fiancé Ricky Stubblefield all of West Frankfort, Cherrilyn Sorge of Marlboro, NY, Jonathan Sargent of West Frankfort, Dakota Sargent and Brooklyn Sargent, Kyle Spencer and Kelsey Garro all of Herrin and Scottie White of Carterville, IL; great grandsons, Hunter McReynolds of Granite City, IL, Julian Scott Thomas McReynolds of Marlboro, NY, Prophett Joseph Sorge of Clearwater, FL, Kyler William Thomas Whitacre of Tampa, FL and Michael Garro of Hurst, IL; great granddaughter, Layla Sullivan of West Frankfort; three brothers, Kenneth Wayne Sharp and his wife Monica of West Frankfort, Jackie Lee Sharp of West Paducah, KY and Charles Robert Sharp and his wife Debbie of Benton, IL; brother-in-law, James Sargent of Gorham, IL; sister-in-law, Wanda Hawk of Tuscola, IL, other extended family and many friends. She was preceded in death by her parents and two sons, William Sargent on December 27, 2002 and William Franklin “Bill” McReynolds on April 12, 2016. Arrangements for Barbara Ann Sargent were entrusted to Stone Funeral Home, 1201 East Poplar St., West Frankfort, IL. The time of visitation was from 9:30 a.m. to 11:00 a.m. on Monday, July 24, 2017, at the funeral home. Following the time of visitation the funeral service was at 11:00 a.m. with Pastor Mike Cash presiding. Special recorded vocal musical selections presented during the service were “What a Day That Will Be” by Brian Free & Assurance, “Will the Circle Be Unbroken” by Randy Travis and “Go Rest High on That Mountain” by Vince Gill. Interment followed in East Fork Cemetery located east of West Frankfort, IL. Pallbearers were Ed McReynolds, Mary Gosney, Quentin Sullivan, Gaston Salliez, Nathan McReynolds and Josh McReynolds. Following the committal service at the cemetery the family and friends gathered at Mary Gosney’s home for a meal and continued time of fellowship and support. For for additional information call the funeral home at 618-932-2161.

Barbara Ann Sargent, age 74, of West Frankfort, IL passed away peacefully at 10:47 a.m. on Friday, July 21, 2017, in the Helia Health Care Center of West Frankfort. She was born on Sunday, June 6, 1943, in Christopher, IL, the daughter of Charles... View Obituary & Service Information

The family of Barbara Ann Sargent created this Life Tributes page to make it easy to share your memories.

Send flowers to the Sargent family.