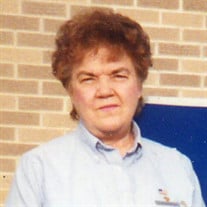 Bernice Muzzarelli, age 87, of West Frankfort, IL passed away peacefully at 9:20 a.m. on Wednesday, November 12, 2014, in Shawnee Christian Nursing Care Center of Herrin, IL. She was born on Wednesday, September 28, 1927, in West Frankfort, IL the daughter of Thomas and Mabel (Humphrey) Uhls. Bernice attended school in West Frankfort and was a graduate of West Frankfort High School. Early in her working career she worked for the Woolworth Department Store in the shoe department of Mt. Vernon, IL for 18 years and later worked as a secretary for the Illinois Secretary of State in the license department for 8 years until her retirement. She was a member of the Central Christian Church of West Frankfort, IL. Her family was an important part of her life and she was always interested in their many activities and enjoyed the times they shared together. The memories created will now be cherished by those she leaves behind. She is survived by her son and daughter-in-law, Jeff and Nancy Muzzarelli of Murphysboro, IL; brother Dean Uhls of Lacrosse, WI, other extended family and many friends. She was preceded in death by her parents; infant son, Jerry; three sisters, Eval Overturf, Virginia Downard and Geraldine Markel and four brothers, Thomas, Kendall, Wendell and James Uhls. Arrangements for Bernice Muzzarelli have been entrusted to the Stone Funeral Home, 1201 East Poplar Street, West Frankfort, IL. The graveside committal service will be at 3:00 p.m. on Saturday, November 15, 2014, at Denning Cemetery, located west of West Frankfort, IL with Rev. Don Wright presiding. Those wishing to attend the service should gather at the cemetery prior to the time of the service. For additional information please contact the funeral home by calling 618-932-2161.

The family of Bernice Muzzarelli created this Life Tributes page to make it easy to share your memories.

Send flowers to the Muzzarelli family.