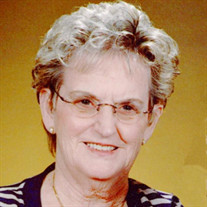 Betty L. McCarty, age 83, of West Frankfort, IL passed away peacefully at 10:54 p.m. Saturday, August 11, 2018 in Integrity Rehabilitation Center in Marion, IL. She was born in West Frankfort, IL on Tuesday, July 30, 1935, the daughter of Millard and Rosie Rose. She grew up in West Frankfort and was a graduate of West Frankfort Community High School class of 1953. She was first united in marriage to Elbert Ray Jones, and in 1978 she married Gerald McCarty in California. Together they shared thirty-eight years of marriage until his death in 2016. For many years she was an active member of the First Baptist Church of West Frankfort where she was a Sunday School teacher and loved working in the Clothing Room. She worked in the West Frankfort High School Cafeteria for twenty-six years and always made sure the students had something to eat. She was a good cook and was devoted to her family and always enjoyed the holidays and the many family gatherings. She will be missed by all who knew and loved her. She is survived by her daughter, Jennifer Jones Hart of Mt. Vernon, IL; two sons, Jeffery L. Jones of West Frankfort and Jimmy Jones and fiancée, Sherry Giegerich of Arnold, MO; nine grandchildren, Brad Younger, Jessica Piercy and husband, Nathan, Dakota Jones, Cory Karnes and husband, John, Cheyenne Jones, Jeff Jones, Matthew Jones, Gabriel Jones, and Lillie Ann Marie Jones; several great-grandchildren; two great great-grandchildren; one brother, Dean Rose of Marion, IL; many nieces, nephews, cousins, other extended family members, and many friends. She was preceded in death by her parents; both husbands, Elbert Ray Jones and Gerald McCarty; two sisters, Patricia Rose and Joanne Holland; and one brother, Richard Rose. Arrangements for Betty L. McCarty were entrusted to Stone Funeral Home, 1201 East Poplar St., West Frankfort, IL. The time of the visitation was from 5:00 p.m. until 7:00 p.m. on Wednesday, August 15th at the funeral home. During the visitation a “Reflection of Life” DVD Memorial Tribute was presented to the family and friends and featured special people, places, and events of Betty’s life. The funeral service was at 11:00 a.m., on Thursday, August 16th, 2018, at the funeral home with Rev. Mike Cash presiding. The prelude and postlude musical selections were recorded piano selections. Special recorded vocal musical selections presented during the service were “Just Breathe” by Pearl Jam, “Calling All Angels” by K.D. Lang and Jane Siberry, “Angel” by Sarah McLachlan, and “The Rose” by Bette Midler. Interment followed in Tower Heights Cemetery in West Frankfort, IL. Those serving as pallbearers were Dakota Jones, Jeff Jones, John Karnes, Brad Younger, and Nathan Piercy. Following the graveside commital service family and friends gathered at the First Baptist Church for a meal and continued time of fellowship and support. For additional information call the funeral home at 618-932-2161.

The family of Betty Lou McCarty created this Life Tributes page to make it easy to share your memories.

Send flowers to the McCarty family.