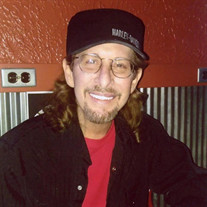 Bret D. Mandrell, age 55, of rural Thompsonville, IL, passed away with his family near, at 2:00 p.m. on Saturday, January 23, 2021, at his home. He was born on Thursday, November 4, 1965, in St. Joseph Memorial Hospital in Murphysboro, IL, the son of David Michael and Karen Yvonne (Sink) Mandrell. Brett attended school in Johnston City, IL, and was a graduate of Johnston City High School Class of 1984. His working career had been with Fowler’s Heating and Air Conditioning Company in Marion, IL, Bombardier Boat Company in Benton, IL, and later became a Certified Nursing Assistant (CNA) working for several health care facilities of the area and was currently working for The Voyage Senior Living Center of Marion, IL. He was of the Baptist faith. Bret was an avid pool player having played in and won many different tournaments. He also was a fan of the St. Louis Blues. He enjoyed being with his family and enjoyed the many family gatherings. The memories created will now be cherished by those he leaves behind. He is survived by his mother and father, Karen and David Mandrell of Thompsonville, IL; paternal grandmother, Katherine L. Mandrell of Thompsonville, IL; sister and brother-in-law, Lori and Clint Hawkins of West Frankfort, IL; nephew, Wesley Hawkins of West Frankfort, IL; niece, Willow Hawkins of West Frankfort, IL; companion, Laura Perez and her son, Austin VanHorn both of West Frankfort, IL; aunt and uncle, Brenda and Bernie Neal of Benton, IL; aunt, Betty Sink of Ina, IL, numerous cousins, other extended family and many friends. He was preceded in death by his paternal grandfather, Mearl Mandrell and maternal grandparents, Lucian and Mae Sink. Arrangements were entrusted to Stone Funeral Home, 1201 East Poplar Street, West Frankfort, IL. The time of visitation was from 10:00 a.m. to 10:30 a.m. on Thursday, January 28, 2021, at the funeral home. Following the time of visitation the funeral service was at 10:30 a.m. with Pastor Joey Dunning presiding. The prelude and postlude were recorded musical selections. Special recorded vocal musical selections presented during the service were “I Did It My Way” and “Amazing Grace” both by Elvis Presley. Interment followed in Masonic & Odd Fellows Cemetery of Benton, IL. Pallbearers were Clint Hawkins, Wesley Hawkins, Austin VanHorn, Cade Dixon, Mike Neal and Matt Neal. Following the committal service at the cemetery the family and friends gathered at the West Frankfort Masonic Lodge Building for a meal and continued time of fellowship and support. For those who preferred, memorial contributions were made to “Hospice of Southern Illinois” and mailed in care of Stone Funeral Home, 1201 East Poplar St., West Frankfort, IL 62896. For additional information call the funeral home at 618-932-2161.

The family of Bret David Mandrell created this Life Tributes page to make it easy to share your memories.

Send flowers to the Mandrell family.