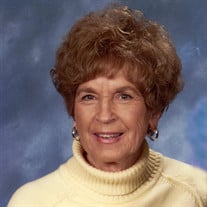 Charleen J. Moore, age 87, of West Frankfort, IL, passed away peacefully at 4:30 a.m. on Wednesday, February 16, 2022, in Integrity Rehabilitation and Nursing Center of Marion, IL. She was born on June 28, 1934, at home in Johnston City, IL, the daughter of John and Juanita (Higginson) Shukites. Charleen attended school in Johnston City thru her Junior year, finishing her Senior year at West Frankfort High School and was a graduate of the Class of 1952. She was united in marriage to Marion Lynn Moore on January 12, 1952, in West Frankfort, IL, and together have shared over 70 years of marriage. She never worked outside of her home and enjoyed seeing to the needs of her family, raising her three sons and managing her home. She was an active member of First Baptist Church of West Frankfort for many years and was part of the choir until her health started to change. She loved her family and looked forward to the many times they shared together, always being interested in their many activities, especially those of her grandchildren and great grandchildren. The many memories created will now be cherished by those she leaves behind. She is survived by her husband, Marion L. Moore of West Frankfort, IL; two sons, Mike Moore and wife, Gay of Johnston City, IL, and Hugh W. Moore and wife, Lisa of Benton, IL; four grandchildren, Tyson Moore and wife, Melissa of Marion, IL, Lyndsey Moore of Benton, IL, Lauren Johnson and husband, Brent of Benton, IL, and Austin (Moore) Glodich of West Frankfort, IL; three great grandchildren, Isabel Moore of Marion, IL, and Lyric Johnson and Landry Johnson both of Benton, IL; sister, Marilyn Clements of Arnold, MO; brother, John Douglas Shukites of Christopher, IL, other extended family and many friends. She was preceded in death by her parents; son, Jeffery Todd Moore who passed away on May 23, 2001, and sister, Elizabeth Helen “Betty” Carter. Arrangements were entrusted to Stone Funeral Home, 1201 East Poplar Street, West Frankfort, IL. The visitation was from 11:00 a.m. to 1:00 p.m. on Monday, February 21, 2022, at the funeral home. During the time of visitation, a “Reflection of Life” DVD Memorial Tribute featuring special people, places and events in Charleen’s life was presented to the family and friends. Following the visitation, the funeral service was at 1:00 p.m., with Rev. Mike Cash presiding. Special recorded vocal musical selections presented during the service were; “In the Garden” by Patti Page, “How Great Thou Art” by Elvis Presley and “Amazing Grace” by Judy Collins. Interment followed next to her son, Jeffery in Lakeview Cemetery of Johnston City, IL. Pallbearers were Mike Moore, Hugh Moore, Tyson Moore, Brent Johnson, Kurt Avripas and John Michael Shukites. The family requested for those who preferred, memorial contributions be made to “American Cancer Society”. Memorial contributions were mailed in care of Stone Funeral Home, 1201 East Poplar Street, West Frankfort, IL, 62896. For additional information call the funeral home at 618-932-2161.

Charleen J. Moore, age 87, of West Frankfort, IL, passed away peacefully at 4:30 a.m. on Wednesday, February 16, 2022, in Integrity Rehabilitation and Nursing Center of Marion, IL. She was born on June 28, 1934, at home in Johnston City, IL,... View Obituary & Service Information

The family of Charleen June Moore created this Life Tributes page to make it easy to share your memories.

Send flowers to the Moore family.