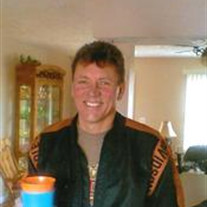 Danny Lee Hebbeler, 49, of West Frankfort departed this life Saturday, April 28, 2012 in Williamson County Illinois. Danny was born February 4, 1963, in Marion, Illinois a son of Donald and Imogene (Riddle) Hebbeler. Danny was a self-employed mechanic. He was a HOG member, member West Frankfort Moose, and the Moose Riders. He is survived by his father Donald of Goreville, his mother Imogene Shelton of Mt.Vernon, his sons Dalton of West Frankfort and Logan of Energy. He is also survived by his brother Rodney of Thompsonville, and his sisters Terrie Diel & husband Rodney of Mt. Vernon, Cindy Umbriana & husband Pete of Mt. Vernon, Margaret Wisely of Marion, and Shirley Pound & husband Dale of Marion, and his companion Theresa Morris. Danny is also survived by many aunts, uncles, and cousins, along with many friends. He was preceded in death by his brother Michael. He was a much loved companion, son, father, brother, uncle, and friend. Funeral services will be held 11:00 AM Wednesday, May 2, 2012, in Varis-Stone Funeral Home with Rev. Ron Cremeens officiating. Interment will be in Ebenezer Cemetery. Friends of Danny may call after 9:00 AM on Wednesday morning at Varis-Stone Funeral Home.

The family of Danny Lee Hebbeler created this Life Tributes page to make it easy to share your memories.

Send flowers to the Hebbeler family.