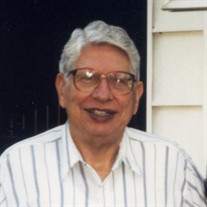 Donald C. Champion, age 92, of West Frankfort, IL, passed away peacefully with his nephew Charlie by his side on Saturday, November 28, 2020 in Westside Rehab and Care Center in West Frankfort, IL. He was born on Monday, July 23, 1928 in West Frankfort, IL, the son of Charles Augustus Champion and Adaline (Strunk) Champion. Don attended school in West Frankfort and was a graduate of West Frankfort High School, class of 1946. He was drafted into the Army and stationed in Korea where he worked as a dental technician. During his time in the Army, his appendix burst and he was sent to Japan to recover until he was able to return to Korea and resume his work. He was united in marriage to Patsy Lou Harben on Saturday, July 11, 1953, in Benton, IL and together they shared over 66 years of marriage until her death on Sunday, October 13, 2019. His working career was with Mt. Vernon Dental Laboratory in Mt. Vernon, IL which he owned and operated with his wife for more than 40 years. They worked with many of the area dentists creating bridges, partials and dentures. After he retired, he started volunteering at the Veteran’s Hospital in Marion, IL in the dental department fixing dentures and glasses, with his wife, Pat, right by his side. Don loved talking to people and could captivate anyone when he started telling his stories. He was a lover of golf and airplanes, he was a very proud pilot and he enjoyed bowling, throughout the years he had accumulated quite a few bowling trophies. He loved playing the Baritone in the Southern Illinois Community Orchestra and was very proud to be able to do so. He is survived by his sister, Mary Charlene Hermann of CO, very special nephew, Charlie Champion and his wife Shirley of Fort Wayne, IN and numerous other nieces and nephews and extended family. He was preceded in death by his parents, his wife and his 2 brothers. Don’s family would like to express their gratitude and thankfulness to the staff of Westside Rehab and Care Center in West Frankfort. Their kindness and care toward Don and toward his family will never be forgotten. Arrangements have been entrusted to Stone Funeral Home, 1201 East Poplar Street, West Frankfort, IL. At this time, all services are private. For those who would like to remember Don, memorial contributions may be made to the “Franklin County Animal Shelter” and mailed in care of Stone Funeral Home, 1201 East Poplar St., West Frankfort, IL 62896. For additional information call the funeral home at 618-932-2161.

Donald C. Champion, age 92, of West Frankfort, IL, passed away peacefully with his nephew Charlie by his side on Saturday, November 28, 2020 in Westside Rehab and Care Center in West Frankfort, IL. He was born on Monday, July 23, 1928 in West... View Obituary & Service Information

The family of Donald C. Champion created this Life Tributes page to make it easy to share your memories.

Send flowers to the Champion family.