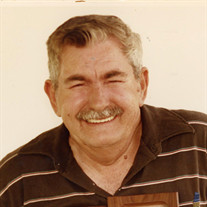 Donald Lee Hancock, age 80, of Granite City, IL and formerly of West Frankfort, IL and Goreville, IL passed away at 5:15 a.m. on Sunday, February 25, 2018 in Barnes-Jewish Hospital in St. Louis, MO. He was born in Goreville, IL on Saturday, May 15, 1937, the son of Walter L. and Afton D. (Howard) Hancock. He grew up in Goreville and was a graduate of the Goreville High School Class of 1955. During his working career he was a clerk operator for forty-three years with the Union Pacific Railroad. Don was of the Baptist faith and in his spare time enjoyed fishing, camping, bowling, watching basketball, and working with model train sets. The memories created will be cherished by those he leaves behind. He is survived by his daughter, Regina Mahan and companion, John Gibbar of Perryville, MO; three sons, Brian Hancock of Williston, ND, Leslie Hancock of Granite City, IL and Daniel and wife, Joetta Hancock, of Denver, CO; two step-daughters, Janice Keele of Glen Carbon, IL and Janet Keele of Mount Vernon, IL; eight grandchildren, and four great-grandchildren; nephew, Raymond Hancock of Carrollton, IL; other extended family; and many friends. He was preceded in death by his parents and one brother, Norman Hancock. Arrangements for Donald Lee Hancock were entrusted to Stone Funeral Home, 1201 East Poplar St., West Frankfort, IL. The visitation was from 4:00 p.m. until 6:00 p.m. on Friday, March 2nd, at the funeral home. The funeral service was at 10:00 a.m. on Saturday, March 3, 2018, at Stone Funeral Home with Bishop Charles Mister presiding. The prelude musical selection was recorded vocal selection “Green Green Grass of Home” by Tom Jones. Special recorded musical selections presented during the service were “Amazing Grace” by Judy Collins, “Goin’ Home” by Dan Auerbach, and “Because He Lives” by the Gaither Vocal Band. Special vocal musical selection presented during the service was “His Eye is on the Sparrow” by Carol Mister who accompanied herself on the piano. Interment followed in Elkville Cemetery of Elkville, IL. Those serving as pallbearers were Brian Hancock, Daniel Hancock, Leslie Hancock, John Gibbar, Ernie Hodge, and Brandon Hancock. Following the graveside committal service the family and friends gathered at Lenora Willis’s home for a meal and continued time of fellowship and support. For additional information call the funeral home at 618-932-2161.

Donald Lee Hancock, age 80, of Granite City, IL and formerly of West Frankfort, IL and Goreville, IL passed away at 5:15 a.m. on Sunday, February 25, 2018 in Barnes-Jewish Hospital in St. Louis, MO. He was born in Goreville, IL on Saturday,... View Obituary & Service Information

The family of Donald Lee Hancock created this Life Tributes page to make it easy to share your memories.

Send flowers to the Hancock family.