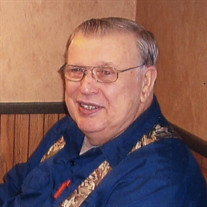 Donald E. Odle, 77, lifelong resident of West Frankfort, IL, passed away peacefully with his family by his side at 3:32 p.m. on Monday, August 17, 2015, in Good Samaritan Regional Health Care Center, of Mt. Vernon, IL. He was born on Monday, August 30, 1937, in West Frankfort, to Carl Eugene and Madeline Louise (Walton) Odle. He was a graduate of the West Frankfort High School Class of 1955. In his youth, he enjoyed the outdoors, hunting and fishing, and scouring the area for arrowheads. He had an avid interest in history, particularly local history, and enjoyed learning how things worked. He began his working career with his father who owned and operated Odle Furnace of West Frankfort. Later he ran Don Odle Heating and Air Conditioning, serving West Frankfort and the surrounding area until he retired in 2000. Don was a longtime member of the Seventh-Day Adventist Church of Thompsonville, IL. Don enjoyed talking and visiting and could often be found at local restaurants, solving the world’s problems, with his friends. He will be missed by many. He is survived by his daughter, Nancy J. Odle of Herrin, IL; longtime sweetheart, Sharon Leonard of Carbondale, IL; grandson, Steve Borgra and his wife, Audrey and two great grandchildren, Kaelyn and Pierce Borgra all of Bloomington, IL; sister-in-law, Terri Odle of Wisconsin; other extended family and many friends. He was preceded in death by his parents; two sons, Donnie and Bill Odle; brother, Rick Odle and sister, Jane Harrington. A memorial service was at 6:00 p.m. led by Pastor John Lomacang. The obituary and comments of memory was presented by Don’s sister-in-law, Terri Odle. There was also a time of sharing of memories by many of those attending. The prelude bluegrass musical selection “In the Sweet Bye and Bye” and postlude bluegrass musical selection “I’ll Fly Away” was presented by Jim Rotramel on the banjo, Terry Conner on the guitar and singing vocal, Glenda Shew on the upright bass and Jack Blades on the Mandolin. Other special congregational hymns presented during the service acappella were “What a Friend We Have In Jesus” and “The Old Rugged Cross”. Interment took place near his sons on Wednesday morning in Tower Heights Cemetery in West Frankfort. Memorial contributions were made to the “Seventh-Day Adventist Church” of Thompsonville, IL, or the donor’s organization of choice. Memorial contribution envelopes were available at the funeral home or were mailed in care of Stone Funeral Home, 1201 East Poplar St., West Frankfort, IL 62896. Those wishing additional information may contact the funeral home by calling 618-932-2161.

Donald E. Odle, 77, lifelong resident of West Frankfort, IL, passed away peacefully with his family by his side at 3:32 p.m. on Monday, August 17, 2015, in Good Samaritan Regional Health Care Center, of Mt. Vernon, IL. He was born on Monday,... View Obituary & Service Information

The family of Donald Eugene Odle created this Life Tributes page to make it easy to share your memories.

Send flowers to the Odle family.