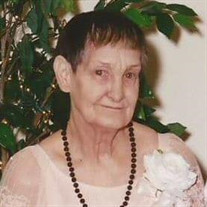 Doris M. Bose, age 79, of rural Benton, IL passed away at home surrounded by her family at 2:32 p.m. on Sunday, February 7, 2016. She was born on Monday, May 18, 1936, in Pike County, IL the daughter of John B. and Ethel Fay (Smith) McDonald. Her early years were spent growing up and attending school in Pike County, IL, before moving to Franklin County, IL. She was united in marriage to Virgil Bose on Friday, on May 28, 1971, in Pittsfield, IL and together they shared nearly 26 years of marriage until his death on Sunday, February 2, 1997. Doris was a member of Caldwell Baptist Church on the Deering Road north of West Frankfort. She was a homemaker and enjoyed caring for her family and home and in her spare time enjoyed reading, sewing and listing to gospel music. She is survived by her five daughters, Kathy Cardin of Benton, IL, Jenny Sprague and husband Gary, Billie Obrecht and companion Robert Brawley, and Chella “Lori” King and companion Lindell Toms all of West Frankfort and Kristina Stroud and husband Brent of Pittsburg, IL; special granddaughter, Ashliegh Bose and companion James Peters of Marion, IL, twenty other grandchildren, forty great grandchildren; three sisters and two brothers-in-law, Kay and Gerald Dickey of Pittsfield, IL, Evelyn Terrell of Chatham, IL and Letha and Allen Dunn of Flagstaff, AZ; brother and sister-in-law, John and Eva McDonald of Pittsfield, IL, other extended family members and many friends. She was preceded in death by her parents, husband, Virgil Bose, two grandsons, Daniel King and Tony Cardin; great-granddaughter, Elizabeth Obrecht; sister, Donna Brown and brother, Jerry McDonald. Arrangements for Doris M. Bose were entrusted to the Stone Funeral Home, 1201 East Poplar St., West Frankfort, IL. Visitation was from 1:00 p.m. to 2:00 p.m. on Saturday, February 13, 2016, at the Caldwell Baptist Church located on Deering Road, north of West Frankfort, IL. Following the time of visitation the funeral service was at 2:00 p.m. with Mike Adkins presiding. The prelude and postlude musical selections were a medley of various recorded gospel vocal selections. Special recorded vocal musical selections played during the service were “Precious Memories” by Alan Jackson, “Farther Along” by Brad Paisley and “Will the Circle Be Unbroken” by Randy Travis. Interment followed in Denning Cemetery west of West Frankfort on the Orient Road. Pallbearers were Travis Cardin, Jimmy McDonald, Travis Kelley, Doug McDonald, Michael Obrecht and Robby Obrecht. Following the committal service at the cemetery the family and friends gathered back at Caldwell Baptist Church for a meal and continued time of fellowship and support. For those who preferred, memorial contributions were made to “Stone Funeral Home” to assist the family. Memorial contributions were available at the church or were mailed in care of Stone Funeral Home, 1201 East Poplar St., West Frankfort, IL 62896. For additional information please contact the funeral home by calling 618-932-2161.

The family of Doris May Bose created this Life Tributes page to make it easy to share your memories.

Send flowers to the Bose family.