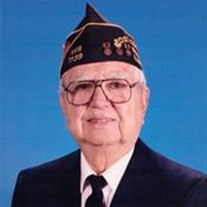 Dwight Tharp, 94, of West Frankfort departed this life at 7:24pm, Wednesday, July 4, 2012 in St. Louis University Hospital following a short illness. Dwight was born September 9, 1917, in Macedonia, Illinois to Alva Otis (Daisy) and Etta CarltonTharp. The family moved to West Frankfort in 1920, and he attended schools here and graduated from Frankfort Community High School in 1937. Dwight and Berniece Gibbs were married April 14, 1942, and shared 68 years of marriage before she preceded him in death in 2010. Dwight retired from Stix Baer and Fuller Department Store in St. Louis after 50 years of service. He was a former manager of the Champion Laundry in Benton before World War II. He served in the United States Army Signal Corps in the Pacific Theatre of War during World War II. He was a member of the Central Methodist Church in West Frankfort. He was a former Commander of the VFW Post 1739 in Belleville, serving there for many years. He was also a member of VFW Post 5764 in West Frankfort, Orient American Legion Post 1961, and did much volunteer work at the Veterans Museum. He was very proud that he was a veteran and remained faithful to various veteran organizations throughout the years. He and his family traveled extensively throughout the United States until his wife's health began to fail. Dwight is survived by one daughter, Annetta of West Frankfort; one brother, Ethridge and his wife, Lola of Christopher; one nephew Dean and Sylvia Tharp of West Frankfort; five nieces, Judy and George Buck, and Diane Rhodes of Springfield; Jean Berger of Newburgh, Indiana; Suetta and Dave Painter of Waynesville, North Carolina; and Jackie and Tom Johnson of Rochester, New York; and a host of great-nieces and great-nephews. Dwight was preceded in death by his parents, wife Berniece, brothers Pender and Mitchell Tharp, sisters Myrtle Gifford and Roberta Breckenridge, infant brother Mervyn, and two nephews, Dale Gifford and Maurice Tharp. Funeral services will be held 2:00 PM, Sunday, July 8, 2012, in Varis-Stone Funeral Home with Rev. Bennett Woods officiating. Interment will be in Tower Heights Cemetery. Military graveside services will be conducted by Orient American Legion Post 1961, VFW Post 5764, and the funeral honors team of the U.S. Army. Friends of the Dwight Tharp family may call from 12:00 Noon until the funeral hour on Sunday at Varis-Stone Funeral Home. For those who wish, memorial contributions may be made to Frankfort Historical Museum or to the Central Methodist Church, and will be accepted at the funeral home at any time.

The family of Dwight Tharp created this Life Tributes page to make it easy to share your memories.

Send flowers to the Tharp family.