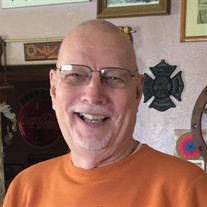 Ed H. Stalcup, age 79, of West Frankfort, IL, passed away at 4:32 p.m. on Thursday, May 14, 2015, in Franklin Hospital of Benton, IL. He was born on Thursday, March 12, 1936, in Mulkeytown, IL the son of Fred and Mildred (Wlasak) Stalcup. Ed answered the call of the nation by serving in the United States Army in counter intelligence and after his period of faithful service was discharged with the rank of Specialist 4th Class. He was united in marriage to Mary Roselee Bishop on Tuesday, January 5, 1954, in Marion, IL and together they shared nearly sixty years of marriage until her death on Tuesday, May 13, 2014. His working career was with Southern Illinois University of Carbondale, IL working in the mail service department for twenty-six years until his retirement. He is survived by four daughters and two sons-in-law, Linda Marie Jackson of Mulkeytown, IL, Peggy Kay Mitchell of West Frankfort, IL, Mary Johanna and Frank Barnfield of Mt. Vernon, IL and Jennifer and Danny Ramey of West Frankfort, IL, five grandchildren, three great grandchildren; brother and sister-in-law, Richard and Sharon Stalcup of Weslaco, TX; sister and brother-in-law, Pat and Norman Melvin of Benton, IL, other extended family and many friends. He was preceded in death by his parents, wife; great grandson, Levi Adrian DeLaval; sister and brother-in-law, Loretta and Thomas Pickering and son-in-law, James “Butch” Jackson. Arrangements for Ed H. Stalcup have been entrusted to the Stone Funeral Home, 1201 East Poplar St., West Frankfort, IL. It was Ed’s wishes that no public services be conducted and his memory will now be cherished by his family and friends. For additional information please contact the funeral home by calling 618-932-2161.

The family of Ed H. Stalcup created this Life Tributes page to make it easy to share your memories.

Send flowers to the Stalcup family.