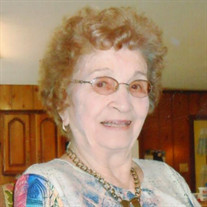 Elizabeth “Betty” Karnes, age 98, of West Frankfort, IL, formerly of Orient, IL, passed away peacefully at 12:05 a.m. on Wednesday, October 25, 2017, in the Helia Health Care Center of Benton, IL. She was born on Tuesday, October 7, 1919, at home in Valier, the daughter of Steve and Katherine (Berze) Fodor. Betty was a lifelong resident of Franklin County, living most of her life in West Frankfort, where she attended school and was a graduate West Frankfort High School Class of 1937. She was united in marriage to Cecil Karnes on Saturday, November 20, 1937, in Johnston City, IL, and together they shared nearly 58 years of marriage until his death on Tuesday, August 15, 1995. Betty was a member of St. Johns Catholic Church of West Frankfort. She also was a member of the American Legion Auxiliary #1961 of Orient for over 35 years, the Veterans of Foreign Wars Ladies Auxiliary No. 5764, Union Hospital Auxiliary, and the Senior Citizens Club all of West Frankfort. She was a homemaker and was actively involved with her family and her community. The many memories that have been created will now be cherished by those she leaves behind. She is survived by her son, Douglas Karnes and friend Helen Golden of West Frankfort; grand-daughter, Kim Odum and husband Tim and great grand-daughter, Meghan Odum all of Marion; grandson, Scott Karnes and wife Diane of Marion; great-granddaughter, Taylor Ann Karnes of Nashville, TN; step-grandson, Ryan Lowe of Amsterdam, of the Netherlands; daughter-in-law, Phyllis Karnes, of Royalton, IL, several nieces, nephews, other extended family, and many longtime friends. She was preceded in death by her parents; husband, Cecil Karnes; son, Gary Karnes on June 7, 1995, and three brothers, Steve, Louis and Frank Fodor and sister, Mary Fodor. Arrangements for Elizabeth “Betty” Karnes were entrusted to Stone Funeral Home, 1201 East Poplar Street, West Frankfort, IL. The time of visitation was between the hours 5:00 p.m. and 8:00 p.m. on Thursday, October 26th at the funeral home. During the time of visitation a “Reflection of Life” DVD Memorial Tribute featuring special people, places and events of Betty’s life was presented to the family and friends. The funeral service was at 11:00 a.m. on Friday, October 27, 2017, at Stone Funeral Home of West Frankfort, IL with Monsignor Kenneth Schaefer presiding. Comments of memory were also presented by Betty’s son, Doug. The prelude and postlude musical selections were recorded piano selections. The service began with the presentation of the recorded vocal musical selection “Ave Maria” by Nana Mouskouri and conclude with the recorded vocal musical selection “Song of Farewell” by Dennis Smolarski. Interment followed next to her husband in Denning Cemetery, located on the Orient road, west of West Frankfort, IL. Pallbearers were Doug Karnes, Scott Karnes, Tim Odum and Matthew Karnes. Following the committal service at the cemetery the family gathered at O’Charley’s Restaurant in Marion, for a meal and continued time of fellowship and support. For additional information please call the funeral home at 618-932-2161.

The family of Elizabeth "Betty" Karnes created this Life Tributes page to make it easy to share your memories.