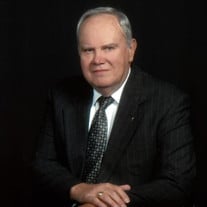 Ellis Charles “Chuck” Baker, age 78, of West Frankfort, IL, passed away peacefully surrounded by his family at 8:48 p.m. on Tuesday, March 5, 2019, in Sunshine Gardens Memory Care of Marion, IL. He was born on Monday, April 1, 1940, in West Frankfort, the son of Burgal Dwight and Virginia Belle (Roberts) Baker. Chuck grew up and attended school in West Frankfort and was a graduate of West Frankfort Community High School Class of 1958. Chuck entered the United States National Guard in 1957 and was honorably discharged from National Guard Reserve in 1963. He was united in marriage to Patricia M. Broy in Piggott, AR, on Saturday, August 9, 1958, and together they have shared over 60 years of marriage. He was a member of the West Frankfort First Christian Church where he attended for many years and served as Deacon and Elder of the church. For many years Chuck and his family made their home in Florida where he served as a Florida State Trooper and in 1995 retired as a Claims Supervisor for the Southeastern United States for State Auto Insurance Company before returning to West Frankfort. He always enjoyed building and remodeling numerous homes in Florida and Illinois. After returning to West Frankfort he enjoyed spending winters in central Florida in the Orlando, Sebring, Winter Haven and Zephyr Hills area. His family was a very important part of his life and he always enjoyed the times shared with family and friends. The many memories that have been created will now be cherished by those who knew and loved him. He is survived by his wife, Patti Broy Baker of West Frankfort; daughter and son-in-law, Angie and Don Deaton of West Frankfort and step granddaughter, Natalee Deaton of Cedarville, OH; other extended family and many friends. He was preceded in death by his parents and brother, Kenny Baker. Arrangements for Ellis Charles “Chuck” Baker were entrusted to Stone Funeral Home, 1201 East Poplar St., West Frankfort, IL. The time of visitation was from 3:00 p.m. to 5:00 p.m. on Saturday, March 9th at the funeral home. During the time of visitation a “Reflection of Life” DVD Memorial Tribute featuring special people, places and events in Chuck’s life was presented to the family and friends. The graveside service and interment was at 2:00 p.m. on Sunday, March 10, 2019, in Tower Heights Cemetery of West Frankfort with Chuck’s son-in-law, Don Deaton presiding. Following the graveside committal service the family and friends gathered at Angie and Don’s home for a meal and continued time of fellowship and support. For those who preferred, memorial contributions were made to either or both; “Alzheimer’s Foundation” or “Tower Heights Cemetery” and mailed in care of Stone Funeral Home, 1201 East Poplar St., West Frankfort, IL 62896. Memorial envelopes were available at the funeral home. For additional information please call the funeral home at 618-932-2161.

The family of Ellis Charles "Chuck" Baker created this Life Tributes page to make it easy to share your memories.