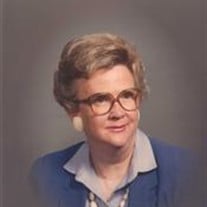 Eloise DeLap, 80, departed this life at 7:45 a.m. Friday, March 2, 2012, in Heartland Regional Medical Center in Marion. Eloise was born May 2, 1931, to Russell and Sarah (Nolen) DeLap in Norris City. Eloise was an active, longtime member of First Baptist Church in West Frankfort. She was a longtime volunteer of First Baptist Church Clothing Room. She was dedicated to her career, which spanned from 1958 to 1991, at Jewish Hospital School of Nursing in St. Louis. She had a nursing degree from Jewish Hospital School of Nursing and later received her B.S. in nursing from Washington University and an MSN from Saint Louis University. Her position upon retirement was assistant director of education in Jewish Hospital School of Nursing. In 1974, she received the Meritorious Service Award from Jewish Hospital. In 1989, she was awarded the Distinguished Nurse Award from Jewish Hospital School of Nursing Alumni. Upon her retirement, Jewish Hospital established an endowment fund in her honor to create scholarships for advanced nursing degrees. Until her death, she remained a professor emeritus at Jewish Hospital School of Nursing. She was active in support of organizations and causes including many cancer drives and "Women's Crusade Against Crime." She was a member of American Nurses Association and National League of Nursing and Missouri League for Nursing Service Scholarship Committee. She also was a member of Sigma Theta Tau at Saint Louis University and Delta Theta Tau Philanthropic Sorority in West Frankfort. She is survived by her brother Kenneth DeLap of Columbus, Ind.; nieces, Monette Wanstreet and husband, Jim, of West Frankfort, Judith Little and husband, Tom, of West Frankfort, Tonya Miller of Celina, Ohio, Paula Jane Blocker of Lawrenceville, Ann Goff and husband, Nate, of Shirley, Ind., Alice Johnson and husband, Rick, of Columbus, Ind.; nephews, Don DeLap and wife, Kendra, of Marion, Rollin DeLap and wife, Beverly, of Franklin, Tenn., Ken DeLap Jr. and wife, Cheryl, of Seymour, Ind., and John DeLap and wife, Tracy, of Columbus, Ind., and several great-nieces and nephews. She is also survived by longtime friend Jane Matthews of St. Louis. She was preceded in death by parents, Russell and Sarah DeLap; brothers, Howard, Nolen, Wayne and Russell DeLap; sisters, Eleanor Whittington and Daisy Catherine DeLap; and close friend, Leah Menees. Services will be at 10 a.m. Tuesday, March 6, in Varis-Stone Funeral Home with the Rev. Mike Cash officiating. Interment will be in Masonic and Odd Fellows Cemetery in Benton. Visitation will be from 5 to 8 p.m. Monday, March 5, at the funeral home. Those who wish, memorial contributions may be made to First Baptist Clothing Room or Eloise DeLap Endowment Fund at Barnes-Jewish School of Nursing and will be accepted at the funeral home at any time.

The family of Eloise DeLap created this Life Tributes page to make it easy to share your memories.

Send flowers to the DeLap family.