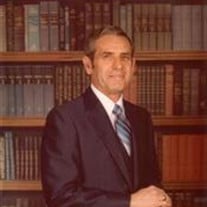 Elvis Nolen, 86, departed this life 8 p.m. Friday, April 6, 2012, at his home in West City surrounded by his family. Elvis was born Feb. 18, 1926, in West Frankfort, the son of Oren and Genieve (DePriest) Nolen. He married Dorothy Bearden Reed on May 25, 1984, in Third Baptist Church of West Frankfort. He was a Navy veteran of World War II in the Pacific Campaign. He began his career as a school teacher after graduating from SIU and University of Illinois. He was the regional superintendant of schools for Franklin County for many years. After retiring, he operated Budman's Hydraulic for his aunt, Bernice Murphy, and was assisted by shop foreman and friend, Jay Coleman. He was of Protestant faith. He was a 58-year member of Masonic Lodge 802 in Carterville. He was also a member of Ainad Shriners Temple of East St. Louis, Frank-lin County Shrine Club, Scottish Rite, Orient American Legion Post 1961, West Frankfort Elks Club 1340, Franklin County Retired Teachers Association, Illinois Retired Regional Superintendants of Schools, past president of Illinois County Officials and past president of Illinois Regional Superintendants of Schools. He was a licensed pilot who flew to meetings in various cities during his career. He was also associated with Civil Air Patrol. He was a man of his word and would never betray a confidence. He will be remembered for his helping hand and as a wonderful husband, father and grandfather. Survivors include his wife, Dorothy Nolen of West City; daughters, Karran Nolen Crombar of Murphysboro and Janis Reed Thomas and husband, Skip, of Benton; grandchildren, Allen Crombar and wife, Deanna, Lance Crombar and wife, Brooke and Brandon Mandrell and wife, Alex; great-grandchildren, Kate and Corey Crombar and Harper Mandrell; special aunt, Bernice Murphy, who was like his second mother; cousins, Karen Novy and husband, John, Kathy Reilly and Bob DePriest and wife, Margo; other family members, Charles and Kaye Howell, Robert Barnfield, Alan and Vicki Barnfield, Mary Mandrell and Mekaela; special helpful neighbors, Roger and Tami Price, Bob and Betsy Varis; and special longtime friend, SIU President Glenn Poshard and wife, Jo. He was preceded in death by his parents. Services will be at 1 p.m. Wednesday, April 11, in Varis-Stone Funeral Home Chapel with Glenn Poshard officiating. Interment will be in Masonic and Odd Fellows Cemetery in Benton. Visitation will be from 5 to 8 p.m. Tuesday at the funeral home. Masonic rites will be conducted at 6 p.m. Tuesday. Graveside military rites will be conducted by Orient American Legion, Zeigler American Legion, West Frankfort VFW and by members of U. S. Navy Department. For those who wish, memorials may be made to Shriners' Hospital for Children, and will be accepted at the funeral home at any time. For the past 40 years, Elvis shared a special relationship with his good friend, Glenn Poshard. He was the First official to endorse Glenn when he ran for the state senate in 1982. From that point forward, he served as Glenn's closet advisor, mentor and campaign chairman and treasurer. He and Glenn spent countless hours together in Springfield and Washington, D.C., with Elvis helping Glenn set up and manage his offices. Their last campaign together was the governor's race in 1998 when Glenn came within two points of winning. Sharing political stories with Glenn was always one of the highlights of his day.

Elvis Nolen, 86, departed this life 8 p.m. Friday, April 6, 2012, at his home in West City surrounded by his family. Elvis was born Feb. 18, 1926, in West Frankfort, the son of Oren and Genieve (DePriest) Nolen. He married Dorothy... View Obituary & Service Information

The family of Elvis Nolen created this Life Tributes page to make it easy to share your memories.

Send flowers to the Nolen family.