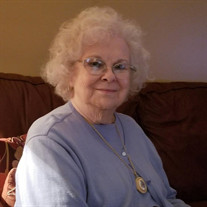 Esther June Wittkamp, age 86, of West Frankfort, IL, passed away peacefully with her family by her side at 3:10 p.m. on Tuesday, August 6, 2019, in Herrin Hospital of Herrin, IL. June, as she was known by, was born on Sunday, October 16, 1932, in Sabinashidalgo, Mexico, the daughter of Manuel and Laura Genevieve (Stephens) Gonzalez. She came to the United States at the age of 6 with her mother and became a naturalize citizen in the early 1960’s. She attended school in West Frankfort and was a graduate of West Frankfort High School. June was united in marriage to Joseph Lionel Wittkamp on Sunday, June 10, 1951, in Ebenezer Church, located southeast of Thompsonville, IL in Saline County, and together they have shared over 68 years of marriage. She was a homemaker the majority of her lifetime and enjoyed seeing to the needs of her husband and children and managing her home. June was a member of First Baptist Church of West Frankfort and also attended until her health declined at Murdale Baptist Church of Carbondale, IL. She was an accomplished artist in both watercolor and oil mediums having complete many paintings. In her spare time she enjoyed quilting, reading, gardening and tending to her flowers. She also enjoyed spending time with her cat “Wolfy” who just recently passed away. Up until her health deteriorated, she was active in the Red Hat Ladies Society. She loved her family and extended family and would always enjoy the many times they spent together. The memories that have been created will now be cherished by those she leaves behind. She is survived by her husband, Joseph L. Wittkamp of West Frankfort; brother and sister-in-law, Richard M. and Melva Gonzalez of Red Bud, IL; nephew, Stephen Gonzalez and wife, Lynn of Prairie Du Rocher, IL; niece, Marissa Bearden and husband, Joe of St. Louis, MO; sister-in-law, Johnnie Martha Blades of West Frankfort; Julie Wagner, who they considered their adopted daughter and her husband, Bob of West Frankfort, other extended family and many friends. She was preceded in death by her parents and two sons, David who passed away on October 7, 1985, and Joseph Richard who passed away on July 5, 1989. Arrangements have been entrusted to Stone Funeral Home, 1201 East Poplar Street, West Frankfort, IL. The graveside committal service will be at 2:00 p.m. on Sunday, August 18, 2019, in Tower Heights Cemetery of West Frankfort, with Pastor Paul Hicks who is Pastor of Murdale Baptist Church of Carbondale, IL presiding. Those wishing to attend the graveside committal service should gather at Tower Heights Cemetery prior to 2:00 p.m. For those who prefer, memorial contributions may be made to “The National Hemophilia Foundation” and mailed in care of Stone Funeral Home, 1201 East Poplar St., West Frankfort, IL 62896. Memorial envelopes will be available at the cemetery and the funeral home. For additional information call the funeral home at 618-932-2161.

The family of Esther June Wittkamp created this Life Tributes page to make it easy to share your memories.

Send flowers to the Wittkamp family.