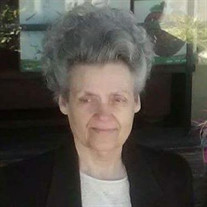 Frances J. Blades, age 85, of West Frankfort, IL, passed away peacefully, at 11:45 a.m. on Thursday, November 30, 2017, in Memorial Hospital of Carbondale, IL. She was born at home, south of Thompsonville, IL, on Friday, October 14, 1932, the daughter of Thomas and Lena Lousetta (Smith) Hodgson. Frances grew up and attended school in Thompsonville and was a graduate of West Frankfort High School Class of 1951. She was united in marriage to Jack D. Blades on Saturday, October 25, 1952 in Glad Tidings Church in Thompsonville, and together they have shared over 65 years of marriage. Frances and Jack owned and operated, Blades Bakery in West Frankfort for 33 years, and for 17 years she was employed by Wal-Mart in Carbondale and Marion and retired from the Marion store. She was a member of the United Pentecostal Church of Johnston City where she was actively involved. She played the piano and sang for many years, taught Sunday school, and worked in other areas of the church. Her family was the most important part of her life. She was always interested in all of their many activities, especially those of her grandchildren, creating many memories to be cherished. She is survived by her husband, Jack Blades of West Frankfort; daughter, Sandy Blades of Dallas, TX; son and daughter-in-law, Michael and Lora Blades of West Frankfort; two grandchildren, Ashley Perry and husband Jeromey of Lake Ozark, MO and Tyler Blades and fiancé, Jessica Rodenhofer of Christopher, IL; four great-grandchildren, Shaylyn C. Perry, Jerison S. Perry, Ellyana Blades and Devan Furlow; sister, Barbara Jane Blades of West Frankfort, other extended family members, and many special friends. She was preceded in death by her parents and infant sister, Mary Lou Hodgson. Arrangements for Frances J. Blades were entrusted to Stone Funeral Home, 1201 East Poplar St., West Frankfort, IL. The time of visitation was from 5:00 p.m. to 7:00 p.m. on Monday, December 4th at the funeral home. The visitation resumed on Tuesday, December 5, 2017, from 10:00 a.m. until 11:00 a.m. at the United Pentecostal Church, located at 1101West 10th Street in Johnston City, IL. During the time of visitation a “Reflection of Life” DVD Memorial Tribute featuring special people, places and events of Frances’ life was presented to the family and friends. Following the time of visitation the funeral service was at 11:00 a.m. with Rev. Michael Glasco, Rev. Brandon Abernathy, Rev. Cecil Sullivan and Rev. Jeromey Perry presiding. The prelude and postlude musical selections were recorded selections. Special recorded vocal musical selections presented during the service were “He Means the World to Me” by Paul Williams, “Angel Band” by Vestal Goodman and George Jones, “Look for Me” by Tanya Goodman Sykes and “Going Home for Christmas” by Steven Curtis Chapman. Interment followed in County Line Cemetery located south of Thompsonville, IL. Pallbearers were Eddie Blades, Jeromey Perry, Andy Heibner, Tyler Blades, Kevin Blades and Marty Cogdill. Following the committal service at the cemetery the family and friends gathered back at United Pentecostal Church for a meal and continued time of fellowship and support. For those who preferred, memorial contributions were made to “United Pentecostal Church” and mailed in care of Stone Funeral Home, 1201 East Poplar St., West Frankfort, IL 62896. Memorial envelopes were available at the funeral home and the church. For additional information call the funeral home at 618-932-2161.

The family of Frances Juanita Blades created this Life Tributes page to make it easy to share your memories.

Send flowers to the Blades family.