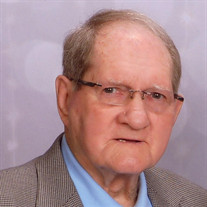 Frank A. Savka, age 87, of West Frankfort, IL, passed away suddenly at 2:44 p.m. on Sunday, December 22, 2019, in Good Samaritan Hospital of Mt. Vernon, IL. He was born on Friday, September 2, 1932, in Royalton, IL, the son of John and Mary (Mikulcza) Savka. Frank attended school in Royalton, and was a graduate of Royalton High School. After graduation he continued on with his education by attending Southern Illinois University School of Technical Careers. While attending there he played college football, something he was proud of because he had never played football before in high school. He also during this time had an offer from the New York Yankees Baseball Team to come and try out for the team but he was unable to make the trip. In 1950, he began working as a Draftsman for Central Illinois Power Service in Marion, IL, locally known as “CIPS”. During the time of the Korean War, Frank answered the call of this nation in December of 1952, by serving in the United States Army. After his period of faithful service he was honorably discharged with the rank of Sergeant. Upon returning home after his service, he resumed work with CIPS for many years until he had an opportunity to work as a Draftsman on a special project at Southern Illinois University in Carbondale, IL. After 3 years he returned back working for CIPS as a Draftsman until he became their Customer Service Representative working out of their West Frankfort office until his retirement on October 1, 1995. He was united in marriage to Sharon Jeanette Kennedy on Saturday, April 2, 1966, at the home of her mother Sara Kennedy in West Frankfort, and together they have shared over 53 years of marriage. Frank was a member of the First Christian Church of West Frankfort, but had been attending at the Plumfield Christian Church for many years. He was a very civic minded person and was involved with many civic organizations and member of many fraternal organizations of the area including; Elks Lodge No. 1340 of West Frankfort, Loyal Order of the Moose Lodge No. 795 of West Frankfort, West Frankfort Kiwanis Club and served as Kiwanis District Lieutenant Governor of the region, former President of the Franklin County Shriners, Royalton Masonic Lodge No. 1047 A.F. & A.M., Ainad Shrine and Scottish Rite Masonic Bodies both of East St. Louis, IL, lifetime member of Heyde-Pillow Post Veteran’s of Foreign Wars Post No 1301 of Marion, IL, American Legion Post No. 1961 of Orient, IL where he had served as District Commander, former chairman for many years of Old King Coal of West Frankfort, former member and President of the West Frankfort Chamber of Commerce and was recognized as “Citizen of the Year” in 1992, former member and President of the Franklin County Tourism Bureau, former member and President of the West Frankfort Civic Center, former Board Member of the Franklin County Country Club and was instrumental in the creation of the Coal Miner’s Pyramid Memorial located in Strand Park of West Frankfort. In his spare time he enjoyed golfing and bowling. He also was very sports minded and was an avid St. Louis Cardinal and Southern Illinois University Saluki Basketball and Football fan. He also loved to travel having visited Hawaii, 7 countries in Europe, Israel and Egypt just to name a few. He was very proud of his Ukrainian Heritage and had traveled to Ukraine 3 years ago to research his relatives. He loved his family and his many friends and enjoyed the times they all shared together. The many memories that have been created will now be cherished by those he leaves behind. He is survived by his wife, Sharon J. Savka of West Frankfort; daughter, Sherry of rural Elkville, IL; brother and sister-in-law, George and Lynda Savka of Royalton, several nieces and nephews, other extended family and many friends. He was preceded in death by his parents; two sisters, Mary Wesdell and Anna Largay and three brothers, John, Andrew and Charlie Savka. Arrangements were entrusted to Stone Funeral Home, 1201 East Poplar Street, West Frankfort, IL. The visitation was from 10:00 a.m. until 1:00 p.m. on Friday, December 27, 2019, at the funeral home. Following the time of visitation the funeral service was at 1:00 p.m. with Pastor Justin Miller presiding. Comments of memory were presented by Frank’s daughter, Sherry. The prelude and postlude musical selections were presented by pianist, Lori Creamer. Special vocal musical selections presented during the service were “How Great Thou Art”, “Old Rugged Cross” and “His Eye Is On the Sparrow” all by vocalist, Sidney McClain with pianist, Lori Creamer accompanying. Interment followed in Tower Heights Cemetery of West Frankfort. Pallbearers were Mike Williams, Kenny Williams, Gary Skinner, Don Jones, Aaron Savka and Lucky Mezny. Military honors were accorded at the graveside by members of the American Legion Post No. 1961 of Orient, IL and American Legion Post No. 177 of Zeigler, IL and members of the United States Army Funeral Honors Detail. Following the committal service the family and friends gathered at Plumfield Christian Church for a meal and continued time of fellowship and support. For those who preferred, memorial contributions were made to Plumfield Christian Church” and mailed in care of Stone Funeral Home, 1201 East Poplar St., West Frankfort, IL 62896. Memorial envelopes were available at the funeral home. For additional information call the funeral home at 618-932-2161.

The family of Frank A. Savka created this Life Tributes page to make it easy to share your memories.

Send flowers to the Savka family.