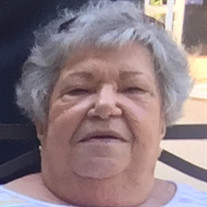 Genell Davis, age 89, of Benton, IL, former lifelong resident of West Frankfort, IL, passed away peacefully with her family by her side at 4:17 a.m. on Thursday, August 12, 2021, in Franklin Hospital of Benton. She was born on Tuesday, March 15, 1932, at home in West Frankfort, the daughter of Ewell Emmerson and Hallie (Martin) Davis. Early in her lifetime, Genell became a beautician first working for Lucille Helms and Winnie Collins in their businesses, until she opened up her own Beauty Shoppe in her home on East Poplar Street in West Frankfort and operated it for more than 50 years until she retired in 2016, and moved to assisted living in Benton. She was of the Methodist faith and was a member of First Methodist Church of West Frankfort. She enjoyed visiting other churches of the area with her sisters when they had special events. She also was a member of the Fraternal Order of Eagles in Herrin, IL. In her spare time, she enjoyed going out dancing, listening to music, especially the Gaither’s, doing crafts, working jigsaw puzzles, was an avid bingo player, traveling when she was younger and just sitting outside enjoying everything around her. She also loved to play cards; especially Canasta and was a member of “The 1st Thursday of the Month Card Group” a group of ladies that faithfully gathered each month playing cards and sharing food and fellowship. She loved her family; known to all as “Aunt Nell” and was many times the “Life and Center of the Family Gatherings.” The many memories that have been created will be treasured by those she leaves behind and will not be forgotten. She is survived by two sisters; Elizabeth M. “Liz” Troutt of West Frankfort and Shirley G. Davis of Benton; seven nieces and nephews, Jackie Davis of Lewistown, IL, William L. “Bill” Troutt and wife, Nancy of West Frankfort, Pamela J. McReynolds and husband, Dave of Marion, IL, Patti J. Sanders and husband, Dave of Benton, Monty L. Hodge and wife, Barbara of Arenzville, IL, Thomas A. Graybael and wife, Lety of Dallas, TX and Lynn Barrineau of Lewistown, IL, a large host of great nieces and great nephews, other extended family and many friends. She was preceded in death by her parents; two brothers, Jack E. Davis and Donald L. Davis who passed away as an infant and her niece, Cindy Davis. Arrangements were entrusted to Stone Funeral Home, 1201 East Poplar Street, West Frankfort, IL. The time of visitation was from 12:00 p.m. to 2:00 p.m. on Sunday, August 15, 2021, at the funeral home. Following the time of visitation, the funeral service was at 2:00 p.m. with Pastor Lance Leeds presiding. Comments of memory were presented by her nephew, Monty Hodge and many others attending the service gave comments of memory from where they were sitting. Special recorded vocal musical selections presented during the service were; “Death Ain’t No Big Deal” by Jake Hess, “Old Friends” by Bill Gaither, George Younce, Ben Speer, Vestal Goodman and Jake Hess and “Wait Till You See Me in My New Home” by the Gaither’s Homecoming Friends. Interment followed near her mother in Denning Cemetery of West Frankfort, IL. Pallbearers were Amanda McReynolds, Monty Hodge, Dave Sanders, Eric Sanders, Bill Troutt and Jordan McReynolds. Following the committal service, the family and friends gathered at the West Frankfort City Park for a meal and continued time of fellowship and support. The family requested for those who prefer, memorial contributions be made to; “American Cancer Society” and mailed in care of Stone Funeral Home, 1201 East Poplar St., West Frankfort, IL 62896. Memorial envelopes were available at the funeral home. For additional information call the funeral home at 618-932-2161.

Genell Davis, age 89, of Benton, IL, former lifelong resident of West Frankfort, IL, passed away peacefully with her family by her side at 4:17 a.m. on Thursday, August 12, 2021, in Franklin Hospital of Benton. She was born on Tuesday, March... View Obituary & Service Information

The family of Genell Davis created this Life Tributes page to make it easy to share your memories.

Send flowers to the Davis family.