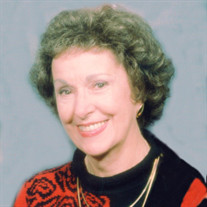 Geneva A. Wharry, age 95, of West Frankfort, IL, passed away peacefully at 10:55 a.m. on Sunday, October 29, 2017 at her home in West Frankfort. She was born on Sunday, January 29, 1922, in Stiritz, IL, the daughter of Charles H. and Martha Ann (Smith) Clark. Geneva grew up in Thompsonville, IL and was of the protestant faith. She was united in marriage to James W. “Jim” Wharry on Saturday, August 10, 1940 in Benton, MO and together they shared seventy-one years of marriage until his death on Thursday, August 25, 2011. She was a member and former president of the Junior Women’s Club of West Frankfort. For many years she enjoyed bowling in a league at the Benton Bowling Alley and always enjoyed working with roses in her yard. She is survived by her daughter; Carolyn Wharry of Belleville, IL; grandson, Craig Wharry of Florissant, MO; great grandson, Vincent James Wharry of Florissant, MO; one sister, Kathy (Howard) Lyle of Genoa, IL; one niece, Damita Christian of Bedford, IN; one nephew, Dennis (Terrie) Falletti; other extended family members, and many friends. Geneva was preceded in death by her parents; husband, James W. “Jim” Wharry; three sisters, Esther Falletti, Vivian Harper, and Amy Elowitz; three brothers, Rev. Beryl Clark, Joe Clark, and Glen Clark. Arrangements for Geneva A. Wharry were entrusted to Stone Funeral Home, 1201 East Poplar St., West Frankfort, IL. The time of visitation was from 1:00 p.m. to 2:00 p.m. on Saturday, November 4, 2017, at the funeral home. Following the time of visitation, the committal service and interment was in Tower Heights Cemetery of West Frankfort, IL with Rev. Brian Harris presiding. After the committal service at the cemetery the family and friends gathered at LaFiesta Mexican Restaurant in West Frankfort for a meal and continued time of fellowship and support. For those who preferred, memorial contributions were made to “Humane Society of Southern Illinois” and mailed in care of Stone Funeral Home, 1201 East Poplar St., West Frankfort, IL 62896. Memorial envelopes were available at the funeral home. For additional information call the funeral home at 618-932-2161.

The family of Geneva Aileen Wharry created this Life Tributes page to make it easy to share your memories.

Send flowers to the Wharry family.