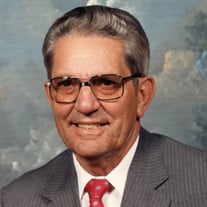 George W. Frakes, age 97, of West Frankfort, IL, passed away peacefully at 4:39 a.m. on Tuesday, December 11, 2018, in Parkway Manor of Marion, IL. He was born on Monday, June 27, 1921, in Leopold, IN, the son of Elwood Boyd and Minnie (Steinhall) Frakes. At the age of 16, George graduated from high school and began working pulling logs out of the woods with a team of horses for 50 cents a day. As the United States became involved in WW II, he started working in the ship yards in Evansville, IN building some of the first PT Boats to be used in the war. When he became of age he answered the call of the nation by enlisting into the United States Navy in October of 1942. For the next 3 years he served in the Asia-Pacific Theater aboard the USS Alabama in the No. 4 engine room. He served as Masters Mate 1st Class and witnessed the dropping of the atomic bomb and the signing of the peace treaty with Japan. After his period of faithful service he was discharged at 10:00 a.m. on Christmas Day in 1945. At the time of his death, George was one of only a few of the WW II veterans of the Navy still alive. After returning from the war he began working for the Tell City Furniture Factory where he met and was united in marriage to Wilda Mae Jackson on Saturday, December 7, 1946, in Owensboro, KY and together they have shared 72 years and 4 days of marriage. In 1960, he was instrumental in the set-up and manufacturing of some of the first fiberglass boats in Tell City, IN. He continued for many years in setting up boat manufacturing plants in Ohio, Warsaw, IN, Danville, IL, Hannibal, MO. He eventually moved to West Frankfort and was with the Mark Twain Boat Company. After leaving the boat industry in 1978, he began working for the Old Ben Coal Company until his retirement in 1987. He was a member of the First United Methodist Church of West Frankfort for many years. He also was a member of the U.M.W.A. Local Union No. 2420, Branchville, IN Masonic Lodge No. 496, West Frankfort IL Masonic Lodge No. 567, Akin IL Masonic Lodge No. 749 where he served as Worshipful Master in 2009, and was an honorary member of Cobden, IL Masonic Lodge. He also was a life member of V.F.W. Post No. 2939 of Tell City, IN, life member of the USS Alabama Crewman’s Association and life member of the Navy Memorial in Washington, D.C. George loved his family and always enjoyed the many times they spent together. The memories created will now be cherished by those he leaves behind. He is survived by his wife, Wilda M. Frakes of West Frankfort; two sons and daughter-in-law, Richard “Rick” Frakes of West Frankfort and William L. “Bill” and Patricia Frakes of Anna, IL; two step grandchildren, Risa Hicks and her husband Dr. Tony of Paducah, KY and Ryan Flamm and his wife Megan of Anna; two step great grandchildren, Alexis and Avery Flamm; sister, Thelma Gibson of Hillard, OH, several nieces, nephews, great nieces and great nephews, other extended family and many friends. He was preceded in death by his parents, three brothers, three sisters and two nephews, Norman Frakes and Jim Oliver. Arrangements were entrusted to Stone Funeral Home, 1201 East Poplar St., West Frankfort, IL. The time of visitation was from 5:00 p.m. to 7:00 p.m. on Friday, December 14th at the funeral home. Following the time of visitation, Masonic Rites were accorded at 7:00 p.m. by members of the Akin Masonic Lodge No. 749 and West Frankfort Masonic Lodge No. 567. Interment took place at 1:00 p.m. on Saturday, December 15, 2018, in Walker Cemetery located near Branchville, IN. Those attending the graveside committal gathered at the cemetery prior to 1:00 p.m. Military honors were accorded at the graveside by members of V.F.W. Post No. 2939 of Tell City, IN and members of the United States Navy Funeral Honors Detail. Also at the graveside Masonic Rites were accorded by members of Branchville IN Masonic Lodge No. 496. Following the committal service at the cemetery the family and friends gather at the United Methodist Church in Branchville for a meal and continued time of fellowship and support. For those who preferred, memorial contributions were made to either or both; “Branchville Cemetery” and or “Branchville Masonic Lodge No. 496” and mailed in care of Stone Funeral Home, 1201 East Poplar St., West Frankfort, IL 62896. Memorial envelopes were available at the funeral home and the cemetery. For additional information please call the funeral home at 618-932-2161.

The family of George W. Frakes created this Life Tributes page to make it easy to share your memories.

Send flowers to the Frakes family.