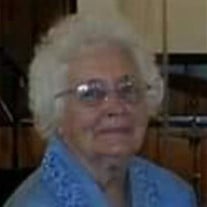 Georgia Lee Smothers Ulrich, 88, of West Frankfort, IL, passed away peacefully at 1:34 p.m. on Thursday, March 7, 2019, in Parkway Manor of Marion, IL. She was born on Tuesday, July 29, 1930, to John L. and Bessie (Dodson) Wilkerson. Georgia graduated from Frankfort Community High School in 1948 and was a member of First United Methodist Church and Central United Methodist Church both of West Frankfort, and was president of United Methodist Women for many years. She was first united in marriage to Wayne L. Smothers in 1947, and together they shared fifty years of marriage until his death in 1997. She later was united in marriage to Bernard Ulrich and they shared over 12 of marriage until his death on December 29, 2013. During her working years she worked in the offices of Dr. Ron Mings, Dr. Jack Purdy, Dr. Nagala Kishore and Dr. Umipathi P. Reddy and worked as an intermittent claims examiner in the Division of Unemployment Compensation for several years. Her family was a very important part of her life and she always enjoyed the times she shared with her family and friends. The many memories that have been created will now be cherished by those who knew and loved her. She is survived by two sons, Wayne L. Smothers and Gregory (Tina) Smothers; sisters, Bonnie Marshall and Connie Barnfield; sister-in-law, Ruth A. Wilkerson; grandchildren, Michael (Angie) Smothers, Dylan Smothers, Ryan Smothers and Haley (Josh) Mixon; step daughter, Barbara (Bill) Robertson; step son-in-law, Larry (Estela) Nolen; step-grandchildren, Mary Lynn (Andy) Berthoux, Michael (Julie) Nolen and Beth (Rick) Jenks; great-grandchildren, Owen and Tripp Mixon, Libby and Lindan Berthoux, Isabelle and Amelia Nolen, Bryan and Kevin Jenks, Jacob and Alex Smothers, a host nieces and nephews, other extended family and many friends. She was preceded in death by her parents, husbands Wayne and Bernard, step-daughter Linda Nolen, sister Betty June, niece Kendra Britton, brother Everett Wilkerson, and brother-in-law Kent Marshall. Arrangements for Georgia Smothers Ulrich were entrusted to Stone Funeral Home, 1201 East Poplar St., West Frankfort, IL. The time of visitation was from 6:00 p.m. to 8:30 p.m. on Sunday, March 10, 2019, at the funeral home. Following the time of visitation the memorial service was at 8:30 p.m. with Rev. Karl Barnfield presiding. The prelude and postlude musical selections were recorded instrumental selections. Special recorded vocal musical selections presented during the service were “Amazing Grace” by Judy Collins and “Precious Memories” by The Statler Brothers. Inurnment followed at a later date in Denning Cemetery of West Frankfort. For those who preferred, memorial contributions were made to “Central United Methodist Church” and mailed in care of Stone Funeral Home, 1201 East Poplar St., West Frankfort, IL 62896. Memorial envelopes were available at the funeral home. For additional information call the funeral home at 618-932-2161.

The family of Georgia Lee Smothers Ulrich created this Life Tributes page to make it easy to share your memories.