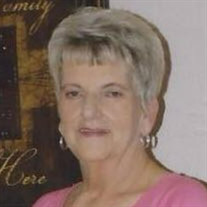 Gloria Yvonne “Vonnie” Griffith, age 77, of West Frankfort, IL, passed away peacefully with her loving husband holding her hand at 9:35 p.m. on Wednesday, June 29, 2016, in the Shawnee Christian Nursing Center of Herrin, IL. Vonnie was born on Wednesday, May 24, 1939, in West Frankfort the daughter of John Harry and Elsie (McElyea) Burton of Orient, IL. Vonnie grew up and attended school in Orient and West Frankfort and was of the Protestant faith. She was united in marriage to Donald C. Griffith on Sunday, November 13, 1955, in Corinth, MS and together they have shared over 60 years of marriage. Vonnie was always busy caring for her family and home and enjoyed the many times she shared with family and friends. She loved watching “Dancing With The Stars” with her neighbors, Toni and Bernie and the family thanks them for making her Monday nights so special. The many memories that were created will now be cherished by her family and many friends. Her family also wants to thank Hospice of Southern Illinois and Shawnee Christian Nursing Home for being so kind to mom and us through this time. She is survived by her loving husband, Donald C. Griffith of West Frankfort and their four loving children, Kevin (Helen) Griffith of Long Beach, NY and Kimbra (Steve) Newton, Kurt (Debbie) Griffith, and Keith (Kellie) Griffith all of West Frankfort, IL; seven grandchildren, Josh (Alisha) Newton, Jeremy (Lara) Newton, Alycia (Jason) Stephenson, Chais Griffith, Nick Griffith and his fiancé Morgan Jennings, Morgan Griffith and Paxton Griffith and four great-grandchildren Kole Newton and Bella, Sofia and Desi Stephenson; brother, John Burton (Julia) of New Ellington, SC. She was also survived by many in-laws, nieces, nephews, friends and her little dog and companion, Tucker. She was preceded in death by her parents; six brothers and sisters, Oneida Burton Davis, Wavell Burton, Shirley Burton Shostrom, Barbara Burton, Zella Burton and Jerry Burton. Arrangements for Gloria “Vonnie” Griffith have been entrusted to Stone Funeral Home, 1201 East Poplar Street, West Frankfort, IL. The time of visitation will be from 11:00 a.m. until 1:00 p.m. on Tuesday, July 5, 2016, in the Christian Worship Center, located on Ken Gray Blvd. Following the time of visitation the memorial service will be at 1:00 p.m. with Willard Strain presiding. For those who prefer, memorial contributions may be made to either “District 168 Arts Boosters” or “Christian Worship Center” or mailed in care of Stone Funeral Home, 1201 East Poplar Street, West Frankfort, IL, 62896. Memorial envelopes will be available at the church. For additional information please contact the funeral home by calling 618-932-2161.

The family of Gloria Yvonne "Vonnie" Griffith created this Life Tributes page to make it easy to share your memories.