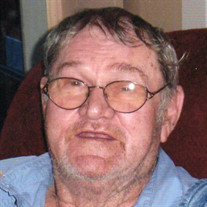 Guy Phillip “Pete” Willmore, age 80, of West Frankfort, IL, passed peacefully with his family by his side, at 9:40 p.m. on Friday, March 11, 2016, at his home. He was born on Wednesday, April 17, 1935, at home in rural Franklin County, IL, the son of Alva Guy and Bessie Beryl (Clark) Willmore. Pete, as he was known by, was united in marriage to Deloris Artileen Dixon on Saturday, July 14, 1956, in Harmony Freewill Baptist Church south of West Frankfort and together they have shared nearly 60 years of marriage. His working career was as a coal miner for many years working for Old Ben No. 26 Mine of Sesser, IL until his retirement in 1988 due to his health. He was a member of Harmony Freewill Baptist Church south of West Frankfort and also a member of the United Mine Workers of America. In his spare time he enjoyed watching St. Louis Cardinal Baseball, watching special programs on television, especially The Animal Planet, riding his bicycle, playing his guitar and listening to country music. He also enjoyed his large family and the many times they all would gather together. He always was interested in all of their many activities, especially those of his grandchildren and great grandchildren and was proud of all their accomplishments. The many memories that have been created will now be cherished by those he leaves behind. He is survived by his wife, Deloris A. Willmore of West Frankfort; son and daughter-in-law, Robert Joseph and Beth Willmore of Thompsonville, IL; two daughters, Deloris Diane Willmore Smith and Charrlotte May Willmore Avery both of West Frankfort; seven grandchildren, Jodi Brook Hiller, Guy Cody Hiller and his wife Alisa, Deloris Danielle Hiller Wright and husband Chris, David Austin Hiller and his wife Ashley, Amanda Jo Willmore Barker and husband George, Lindsay Kay Willmore and Mallory Mae Avery; seven great grandchildren, Shyanne Danee Bean, Emberly Nicole Bean, Lena Jo Barker, Reed George Barker, William Boone Basenberg, Oakley Dentyn Hiller and Lando Ronan Hiller, two half sisters, other extended family and many friends. He was preceded in death by his parents; four brothers, Fred, John, Joe Willmore and one other as an infant. Arrangements for Guy Phillip “Pete” Willmore were entrusted to Stone Funeral Home, 1201 East Poplar Street, West Frankfort, IL. The visitation was from 5:00 p.m. until 7:00 p.m. on Monday, March 14th at the First Christian Church, located at 1001 South Cherry Street, West Frankfort. The funeral service was at 1:00 p.m. on Tuesday, March 15, 2016, at First Christian Church with Rev. Ivan Ryan presiding and assisted by Pete’s grandson, Guy Cody Hiller. Prelude and postlude were recorded musical selections. Special vocal recorded selections were “Long Black Train” by Josh Turner, “Go Rest High on That Mountain” by Vince Gill and “In The Sweet Bye and Bye” by Ann Williamson. Interment followed in Boner Cemetery of West Frankfort. Pallbearers were Cody Hiller, Chris Wright, Raymond Leon McLane, Austin Hiller, Marvin Thompson and George Barker. Following the service the family and friends gathered at Pete and Deloris’ home for a meal and continued time of fellowship and support. For additional information please contact the funeral home by calling 618-932-2161.

The family of Guy Phillip "Pete" Willmore created this Life Tributes page to make it easy to share your memories.