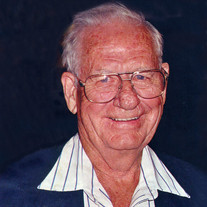 Harvey Lee Hayes, age 92, of West Frankfort, IL passed away on Tuesday, September 23, 2014, at 7:10 p.m. in the Veteran’s Community Living Center of Marion, IL. He returned to West Frankfort in 2002, after living for twenty-two years in Phoenix, AZ and has resided in Heritage Woods Living Center of Benton, IL for the past two years. Harvey was born on Monday, January 9, 1922, in Eldorado, IL, the first of nine children, of Henry Clyde and Mabel (Davis) Hayes. Harvey grew up and attended school in West Frankfort, IL and was a graduate of West Frankfort High School class of 1940. He answered the call of this nation by enlisting into the United States Navy during the time of WW II serving in the Asiatic Pacific Campaign where he was a tug boat operator and after his period of faithful service was honorably discharged on March 10, 1946. Several years ago Harvey was honored to be able to attend the "Honor Tour" to the WW II Memorial in Washington, DC. Harvey was united in marriage to Nettie Beck in October of 1951, and together they shared over twenty-two years of marriage until her death on January 30, 1973. When he was young, Harvey delivered newspapers for the Daily American Newspaper. At the age of nineteen he started working for Sandner Electric in West Frankfort where he trained as a machinist and continued to work as a machinist in Downers Grove, IL. He later worked for many years as a painter and interior decorator. Harvey was very creative and enjoyed landscape and portrait painting. He always liked working in his yard, gardening, and fishing and was an avid Cardinals fan. He valued the company of his many friends, and loved to laugh and have others laugh with him; he was a great dancer and enjoyed listening to music. His church membership was with the First Baptist Church of West Frankfort, IL. He was the father of four children, Danny, Nancy, Susie and Mike. He is survived by his sister, Ruby Herron of West Frankfort, IL; three grandsons, including, Jimmy Stafko of Cleveland, OH; eighteen nieces and nephews, several cousins and many friends. He was preceded in death by his parents; wife, Nettie; son, Michael Lee Hayes; daughter, Susan Hayes; four brothers, Sam, Otis, Bill and George Hayes; infant brother, Bueran Hayes and two sisters, Neva Drake and Sherry McReaken. Arrangements for Harvey Lee Hayes were entrusted to the Stone Funeral Home, 1201 East Poplar Street, West Frankfort, IL. The visitation for the family and friends was on Tuesday, September 30, 2014, from 5:00 p.m. to 6:30 p.m., at the funeral home. Following the time of visitation military rites were accorded at 6:30 p.m. by the Orient American Legion Post and the US Navy Funeral Honors Detail of St. Louis, MO at the funeral home. Members of the US Navy Funeral Honors Detail participating were Naval Officers EO1 Don Floyd and OS1 Mark Rulo. Presentation of the flag to Harvey’s sister, Ruby was by Naval Officer EO1 Don Floyd. After the military service Masonic services were accorded by Frankfort Masonic Lodge No. 567 of West Frankfort, IL. Masonic officers participating were Worshipful Master, Mike Rennie; Chaplain, Ray Larrison and Past Master, Eddie Stevens. Following the Masonic service the memorial service was held with Rev. Mike Cash presiding. The prelude and postlude musical selections were recorded piano selections. Special recorded vocal musical selection presented during the service was “How Great Thou Art” by Elvis Presley. For those who preferred, memorial contributions were made to either “Hospice of Southern Illinois” or the “Veteran’s Community Living Center of Marion”. Memorial contribution envelopes were available at the funeral home or were mailed in care of Stone Funeral Home, 1201 E. Poplar Street, West Frankfort, IL, 62896. For additional information please contact the funeral home by calling 618-932-2161.

Harvey Lee Hayes, age 92, of West Frankfort, IL passed away on Tuesday, September 23, 2014, at 7:10 p.m. in the Veteran&#8217;s Community Living Center of Marion, IL. He returned to West Frankfort in 2002, after living for twenty-two years... View Obituary & Service Information

The family of Harvey Lee Hayes created this Life Tributes page to make it easy to share your memories.

Send flowers to the Hayes family.