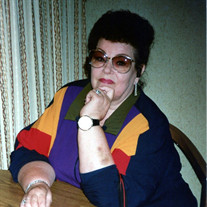 Hettie Shaw Webb, age, 94, of West Frankfort, IL, passed away peacefully with her family by her side, at 11:50 a.m. on Monday, April 29, 2019, in Herrin Hospital. She was born on Thursday, January 1, 1925, in West Frankfort, the daughter of Grover Cleveland and Ora (Harris) Shaw. Hettie attended school in West Frankfort and was a graduate of West Frankfort High School Class of 1943. She was united in marriage to Dr. Don J. Webb on Saturday, May 7, 1955, in West Frankfort and together they shared over 46 years of marriage until his death on Wednesday, March 28, 2001. Hettie loved seeing to the needs her family and managing her home. She also assisted her husband operating the family business, Dr. Don J. Webb Optometry of West Frankfort. She was a member of the First Baptist Church of West Frankfort and also a member of the Daughter’s of the American Revolution. In her spare time earlier in her lifetime she enjoyed camping. Hettie also enjoyed cooking and baking; especially rolls that she would give to her many friends. She loved singing and was in quartets that sang on the area radio stations. Hettie was also involved in photography with her husband and enjoyed developing photos in the dark room of their home. She had an interesting hobby; she would find spider webs out in the fields and spray paint them imprinting the web on a background and would then frame them and display in the optometry office. She had a good sense of humor and loved being around her family; especially her granddaughter Ashley who was the light of her life and was always interested in all of their many activities. The many memories that have been created will now be cherished by those she leaves behind. She is survived by her son and daughter-in-law, Jeff and Jane Webb of West Frankfort; granddaughter, Ashley Marie Webb-Rice and her husband Lee of St. Louis, MO, several nieces and nephews, other extended family and many friends. She was preceded in death by her parents, husband; three sisters, Lois Stokes, Evelyn Dudenbostle and Thelma Echols and one brother, John Willis Shaw who passed away at the age of 11. Arrangements were entrusted to Stone Funeral Home, 1201 East Poplar Street, West Frankfort, IL. The visitation was from 9:00 a.m. until 11:00 a.m. on Saturday, May 4, 2019, at the funeral home. During the time of visitation a “Reflection of Life” DVD Memorial Tribute featuring special people, places and events in Hettie’s life was presented to the family and friends. Following the time of visitation the funeral service was at 11:00 a.m. with Pastor Mike Cash presiding. The eulogy and comments of memory were presented by Hettie’s granddaughter Ashley. The prelude and postlude musical selections were recorded musical selections. Special vocal musical selections presented during the service by Jennifer Ellison were “Rock of Ages” who accompanied herself on the piano and “Beulah Land” with recorded accompaniment. Interment followed next to her husband in Boner Cemetery located south of West Frankfort. Pallbearers were Jim Rotramel, Mike Cash, McKenna George and Lindsey Leuhr. Following the committal service at the cemetery the family and friends gathered at First Baptist Church in West Frankfort, for a meal and continued time of fellowship and support. For those who preferred, memorial contributions were made to either or both “The Kidney Foundation” or “The Disabled Veteran’s Organization” and mailed in care of Stone Funeral Home, 1201 East Poplar St., West Frankfort, IL 62896. Memorial envelopes were available at the funeral home. For additional information call the funeral home at 618-932-2161.

The family of Hettie Shaw Webb created this Life Tributes page to make it easy to share your memories.

Send flowers to the Webb family.