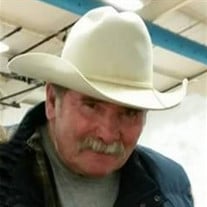 James H. “Big Jim” Wilkins, age 76, of West Frankfort, IL, passed away peacefully at 2:35 p.m. on Sunday, March 5, 2017, in the Veteran’s Administration Community Living Center of Marion, IL. He was born on Sunday, September 15, 1940, in West Frankfort, the son of William Henry and Evelyn Pauline (Zimmerman) Wilkins. James answered the call of this nation by enlisting into the United States Marine Corps in January of 1959, and after his period of faithful service was honorably discharged in January of 1962. He was united in marriage to Brenda Jo (Stanhouse) Swofford in the Holt’s Prairie Baptist Church near Pinckneyville, IL on Thursday, November 20, 1980, and together they have shared over 36 years of marriage. His working career was as a carpenter in addition to working in the area coal mines as a miner. He also helped his wife Brenda with her business, the Pond Creek Boot Company of West Frankfort. Jim was of the Baptist faith. In his spare time he enjoyed spending time outdoors, especially fishing and hunting. He also enjoyed competing in rodeos, team roping, and participating in trail rides. In the last few years he enjoyed listening to and playing bluegrass music. He often participated in jam sessions and played with groups where he played the fiddle and guitar. He loved his large family and was always interested in all of their many activities and enjoyed the gatherings and special times they spent together. The many memories that have been created will now be cherished by those he leaves behind. He is survived by his wife, Brenda J. Wilkins of West Frankfort; two sons and one daughter-in-law, Scott and Donna Wilkins of Braceville, IL and James E. Wilkins of West Frankfort; three daughters and sons-in-law, Laura and Bob Steele of O’Fallon, IL, Dianne and Matt Grider of Marion, IL and Angie and Mike Crisel of Thompsonville, IL; ten grandchildren, Lindsey Wilkins, Tori Crawford, Scott Wilkins, Maranda Lawser, James A. Wilkins, Alana Wilkins, Ryan Wilkins, Sara Grider, Mackenzie Crisel and Carter Crisel; three great grandchildren, Aubrey Lawser, Gavin Crawford and Maison Crawford; five sisters and three brothers-in-law, Evelyn Avery of West Frankfort, Sue and Mick Smith and Debbie and Larry Franklin all of Royalton, IL, Cindy Ivy of Alexander, AR and Pam and Dave Ellis of Pittsburg, IL, other extended family, and many friends. He was preceded in death by his parents; two brothers, Ray Wilkins and Anthony Gonzalas and five sisters, Shirley Dotson, Judy Jerald and Edwina Bible and also as infants Betty and Joni Wilkins. Arrangements for James H. “Big Jim” Wilkins were entrusted to Stone Funeral Home, 1201 East Poplar St., West Frankfort, IL. The time of the visitation was from 5:00 p.m. until 8:00 p.m. on Tuesday, March 7th at the funeral home. During the time of visitation a “Reflection of Life” DVD Memorial Tribute featuring special people, places and events of Jim’s life was presented to the family and friends. The funeral service was at 11:00 a.m., on Wednesday, March 8, 2017, at Stone Funeral Home with Rev. Bill Perry presiding. The prelude and postlude musical selections were a bluegrass variety of selections presented by Glenda Shew on bass, Jack Blades on mandolin, Paul Russel on guitar, and Jim Rotramel on the banjo. Special vocal selections presented during the service were both performed by Rev. Bill Perry. They were “Wayfaring Stranger” in which he accompanied himself on the guitar and “Beulah Land,” performed with a recorded accompaniment. Interment followed in Denning Cemetery located west of West Frankfort near Orient, IL. Those serving as pallbearers were Ryan Crawford, Luke Stanhouse, Scott Wilkins, James Wilkins, Ryan Lawser, and Jon Stanhouse. Military honors were accorded at the graveside by members of the Orient American Legion Post No. 1961 and Zeigler American Legion Post No. 177 and West Frankfort V.F.W. Post No. 5764. Members of the Marine Corps Military Honor Guard who participated in folding the flag were Corporal Jeremy Patania and Corporal James Pointek. Presentation of the flag to Brenda was by Corporal James Pointek. Following the graveside committal service the family and friends gathered at the Thompsonville First Baptist Church for a meal and continued time of fellowship and support. For those who preferred, memorial contributions were made to either or both “The Veteran’s Community Living Center” or “Hospice of Southern Illinois” and mailed in care of Stone Funeral Home, 1201 East Poplar St., West Frankfort, IL 62896. Memorial envelopes were available at the funeral home. For additional information please call the funeral home at 618-932-2161.

The family of James Henry "Big Jim" Wilkins created this Life Tributes page to make it easy to share your memories.