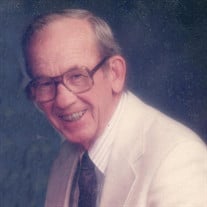 James F. Brown, age 90, of West Frankfort, IL, passed away peacefully with his loving wife near, at 4:50 p.m. on Tuesday, February 16, 2021, at his home. He was born on Saturday, December 6, 1930, in Cambria, IL, the son of Fredrick Funkston and Viola May (Richey) Brown. He attended school in Murphysboro, IL and was a graduate of Murphysboro High School. After graduation he continued with his education attending for two year at Southern Illinois University of Carbondale, IL. James answered the call of this nation by serving in the United States Army during the time of the Korean War from October of 1951, to September of 1953, and after his period of faithful service was honorably discharged. After returning from the military he began a long working career with the Stotlar-Herrin Lumber Company. He first began in Murphysboro for several years and later was transferred to their facility in West Frankfort where he served as Manager for many years. Toward the end of his working career he also worked for Southern Illinois University in food service until his retirement. James was united in marriage to Mary Carlene “Connie” (Martin) Good on Friday, January 22, 1971, in the First Christian Church of West Frankfort, and together they had just celebrated their 50th Anniversary. He was a member of the Townmount Baptist Church located west of West Frankfort where he also served as Deacon for many years. Later in his lifetime, James felt the calling to ministry and became a license minister on July 14, 1999. He often served as minister and song leader at the church. He also loved to sing and was a part of a quartet often singing at church. James had a gift of writing poetry and had written a multitude of poems often sharing them with others. He was an avid St. Louis Cardinal Baseball fan and loved to laugh and joke with those around him. He loved his family and always enjoyed the many times they all shared together. The many memories that have been created will now be cherished by those he leaves behind. He is survived by his wife, Connie Brown of West Frankfort; three daughters, Karen S. Gunter and her husband, Charles “Chuck” of West Frankfort, Vickie J. Jones of Jackson, GA and Lisa G. Gregory of Stockbridge, GA; son, James D. Brown of Marion, IL, fourteen grandchildren, eight great grandchildren, other extended family and many friends. He was preceded in death by his parents; sister, Betty Westmier; brother, Monte Brown and son-in-law, Randy Jones. Arrangements were entrusted to Stone Funeral Home, 1201 East Poplar Street, West Frankfort, IL. The time of visitation was from 11:00 a.m. to 1:00 p.m. on Wednesday, February 24, 2021, at the funeral home. During the time of visitation a “Reflection of Life” DVD Memorial Tribute featuring special people, places and events in James’ life was presented to the family and friends. Following the time of visitation the funeral service was at 1:00 p.m. with Pastor Karl Barnfield presiding. The prelude and postlude musical selections were presented by pianist, Terry Ragain. Special vocal musical selections presented during the service were “Serenaded By Angels” by Kirk Talley and “I’ll Fly Away” by Joey & Rory. Interment followed in Denning Cemetery of West Frankfort, IL. Pallbearers were Jason Jones, Jon Jones, Matt Jones, Shawn Jones, Eric Gunter, and Kiel Gunter. Military honors were accorded at the graveside by members of the American Legion Post No. 1961 of Orient and American Legion Post No. 177 of Zeigler and members of the United States Army Funeral Honors Detail. The family requested for those who preferred, memorial contributions were made to either or both; “St. Jude Children’s Research Hospital” or “Shriners Hospitals for Children” and mailed in care of Stone Funeral Home, 1201 East Poplar St., West Frankfort, IL 62896. Memorial envelopes were available at the funeral home. For additional information call the funeral home at 618-932-2161.

The family of James Fredrick Brown created this Life Tributes page to make it easy to share your memories.

Send flowers to the Brown family.