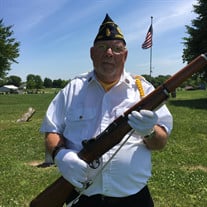 James K. Harriss, age 74, of West Frankfort, IL, passed away peacefully at 11:33 a.m. on Thursday, January 10, 2019, in Parkway Manor of Marion, IL. He was born on Wednesday, July 26, 1944, in Union Hospital of West Frankfort, the son of Lester Hutton and Mada Lillian (Lamont) Harriss. Jim attended school in West Frankfort and was a graduate of West Frankfort High School Class of 1962. He continued on with his education at Southern Illinois University and received an Associate Degree as a Machinist. He was united in marriage at the First Baptist Church of Benton, IL, to Winona Joyce Fryer on Friday, September 17, 1965, and together they have shared over 53 years of marriage. Jim answered the call of this nation in 1966, by serving in the United States Air Force during the time of the Vietnam War as a Munitions Loader and Crew Chief in Thailand. After his period of faithful service he was honorably discharged with the rank of Sergeant in 1970. He worked for many years for Sears in West Frankfort, Marion and Carbondale. He later became a Correctional Officer for the State of Illinois Department of Corrections and worked at the Menard, Harrisburg Youth Center and Big Muddy facilities. He retired as a Sergeant after 23 years of service on June 25,2010. He has been a member of the Trinity United Methodist Church in West Frankfort since 1956. Some of his other memberships include currently serving as the curator of the West Frankfort Veteran’s Museum and every year would take displays to the DuQuoin Fair highlighting the museum. He was member of the American Legion Post No. 1961 of Orient and the V.F.W. Post No. 5764 of West Frankfort, where he served on the funeral ritual team. He was honored to be part of the Veterans’ Honor Flight that traveled to Washington D.C. for the day on September 12, 2017. He also was a member of the National Rifle Association and board member of the West Frankfort Historical Museum. In his spare time he enjoyed working in his pole barn and teaching his grandchildren about tools. He loved to rebuild things and collect tools and would give them to people who had a need. He was always willing to help his neighbors, he enjoyed target shooting and teaching his grandchildren about shooting and gun safety, doing yard work, camping and spending time in the outdoors. He was an avid NASCAR fan and once road in an actual NASCAR at the Daytona Speedway. His family was a very important part of his life. He enjoyed the times they all got together and was always interested in all of their many activities, especially those of his grandchildren. The many memories that have been created will now be cherished by those he leaves behind. He is survived by his wife, Winona J. Harriss of West Frankfort; son and daughter-in-law, Steven Christopher and Shannon Harriss of Seymour, IN; daughter and son-in-law, Holly Lynn and Bart Sinks of Marion, IL; four grandchildren, Connor and Caden Harriss of Seymour and Kelsey and Jackson Sinks of Marion; sister and brother-in-law, Barbara and Gary Jemison of West Frankfort; sister-in-law, Linda Saunders of Benton, IL, five nephews, three nieces; his beloved rescue dog, Mocha, other extended family and many friends. He was preceded in death by his parents. Arrangements for James K. Harriss have been entrusted to Stone Funeral Home, 1201 East Poplar St., West Frankfort, IL. The time of visitation will be from 5:00 p.m. to 8:00 p.m. on Monday, January 14th at the funeral home. During the visitation at 6:30 p.m. Commander Howard Johnson of American Legion Post No. 1961 of Orient will present a special Veteran’s Tribute. The funeral service will be at 11:00 a.m. on Tuesday, January 15, 2019, at Stone Funeral Home with Pastor Joey Dunning presiding. Interment will follow in Tower Heights Cemetery of West Frankfort. Military honors will be accorded at the graveside by members of the American Legion Post No. 1961 of Orient and American Legion Post No. 177 of Zeigler and members of the United States Air Force Funeral Honors Detail. For those who prefer, memorial contributions may be made to “West Frankfort Veterans’ Military Museum” and mailed in care of Stone Funeral Home, 1201 East Poplar St., West Frankfort, IL 62896. Memorial envelopes will be available at the funeral home. For additional information please call the funeral home at 618-932-2161.

The family of James Keith Harriss created this Life Tributes page to make it easy to share your memories.

Send flowers to the Harriss family.