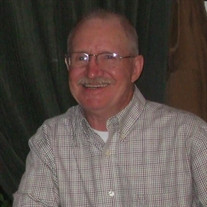 James W. “Jim” Jones, age 72, of rural West Frankfort, IL, went home to be with his Lord at 6:10 a.m. on Sunday, July 2, 2017, at his home. He was born on Saturday, July 22, 1944, in West Frankfort the son of Carl Wilford and Helen (Mabry) Jones. Jim attended school in West Frankfort and was a graduate of West Frankfort High School Class of 1962. He was united in marriage to Sally Maureen Blades on September 24, 1966, in West Frankfort and together they have shared over 50 years of marriage. Jim’s working career was as an electrician working for Old Ben Mine No. 26 of Sesser, IL for 20 years until the mine closed in 1996. He later began working for Flander’s Electric of Marion, IL in 1998, and remained there until his retirement in 2008. He was a member of the First Baptist Church of West Frankfort and also a member of the United Mine Workers of America. Jim always kept busy and in his spare time he enjoyed fishing. He was a patient and detail person who loved to trouble shoot problems until he solved the issue. He also loved to help family and friends with projects they had going. He was proud of his family and was always interested in all of their many activities, especially those of his grandchildren. The many memories created will now be cherished by those he leaves behind. He is survived by his wife, Sally M. Jones of West Frankfort; three sons and two daughters-in-law, Matt Jones of Cedar Park, TX, Dan and Richelle Jones of West Frankfort and Ben and Emily Jones of Dahlgren, IL; two daughters, Tammy Brow of Franklin, NC, and Melissa Jones of IL, proud grandpa to 10 grandchildren who were his joy; two sisters and brother-in-law, Eva Briley of Troy, IL and Frances and Jack Smith of Benton, IL, a host of nieces and nephews, other extended family and many friends. He was preceded in death by his parents. Arrangements for James W. “Jim” Jones were entrusted to Stone Funeral Home, 1201 East Poplar St., West Frankfort, IL. The time of visitation was from 9:00 a.m. to 11:00 a.m. on Wednesday, July 5, 2017, at the funeral home. During the time of visitation a “Reflection of Life” DVD Memorial Tribute featuring special people, places and events in James’ life was presented to the family and friends. Following the time of visitation the funeral service was at 11:00 a.m. with Jim’s son, Pastor Ben Jones presiding. The prelude and postlude musical selections were recorded selections. Special vocal musical selection presented at the close of the service was “Amazing Grace” by vocalist, Carolyn Williams who also played the piano with Jacob Jones accompanying on the guitar. Interment followed in Boner Cemetery located south of West Frankfort. Pallbearers were Jacob Jones, Braeden Jones, Will Jones, Jesse Young, Sam Williams and Stan Williams. Following the committal service at the cemetery the family and friends gathered at Jim and Sally’s home for a meal and continued time of fellowship and support. For those who preferred, memorial contributions were made to “Hospice of Southern Illinois” and mailed in care of Stone Funeral Home, 1201 East Poplar St., West Frankfort, IL 62896. Memorial envelopes were available at the funeral home. For additional information please contact the funeral home by calling 618-932-2161.

The family of James W. "Jim" Jones created this Life Tributes page to make it easy to share your memories.