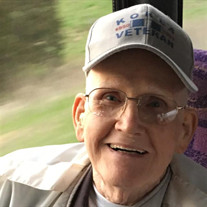 Heaven got a little brighter on Wednesday, October 10, 2018. Jim Thompson arrived at the pearly gates and livened up the party, as he did so many times for us while he was here on Earth. He passed away peacefully around 10:15 PM, surrounded... View Obituary & Service Information

The family of James George Wilburn Thompson created this Life Tributes page to make it easy to share your memories.

Send flowers to the Thompson family.