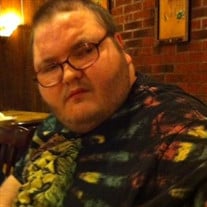 Jesse J. Raines, age 22, of West Frankfort, IL, passed away peacefully in Barnes-Jewish Hospital of St. Louis, MO, at 6:04 a.m. on Monday, August 15, 2016. He was born on Tuesday, March 15, 1994, in Gallatin, TN, the son of Charles James and Deborah Sue (Holt) Raines. Jesse grew up and attended school in West Frankfort and was a graduate of West Frankfort High School Class of 2016. He was of the Baptist faith. Jesse loved to color pictures for his many friends and enjoyed listening to music. He always enjoyed the times he shared with his family and friends and the memories that have been created will now be cherished by those who knew and loved him. He is survived by his mother, Debbie Raines and Ronald Doty of West Frankfort; father, Charles J. Raines of Buckner, IL; five brothers and sisters, Charlie Raines of West Frankfort, Nathan Norman and his wife Gabby of West Frankfort, Brittany Doty of Dallas, TX, Kenny Norman of West Frankfort and Brennan Doty of DuQuoin, IL, other extended family and many friends. He was preceded in death by his grandparents. Arrangements for Jesse J. Raines were entrusted to Stone Funeral Home, 1201 East Poplar Street, West Frankfort, IL. The visitation was from 5:00 p.m. until 7:00 p.m. on Friday, August 19th at the Northern Baptist Church, located at 1502 East Oak Street, West Frankfort, IL. The visitation resumed again on Saturday, August 20, 2016, from 11:00 a.m. until 1:00 p.m. at the church. Following the time of visitation the funeral service was at 1:00 p.m. on with Pastor David Mitchell presiding. The recorded prelude vocal musical selections presented were “Sweet Home Alabama” by Lynyrd Skynyrd and “I Love You” by Barney. Special recorded vocal musical selections presented during the service were “You Raise Me Up” by Josh Groban, “When I Get Where I’m Going” by Brad Paisley and Dolly Parton and “Softly and Tenderly” by Deborah Johnson. The service concluded with the recorded postlude musical selection “See You Again” by Carrie Underwood. Interment followed in Blairsville Cemetery of Blairsville, IL. Pallbearers were Charlie Raines, Nathan Norman, Brennan Doty, Kenny Norman, Thomas Chittwood and Austin Samel. Following the committal service at the cemetery the family and friends gathered back at the home of Jesse’s mother Deborah for a meal and continued time of fellowship and support. For additional information please contact the funeral home by calling 618-932-2161.

The family of Jesse J. Raines created this Life Tributes page to make it easy to share your memories.

Send flowers to the Raines family.