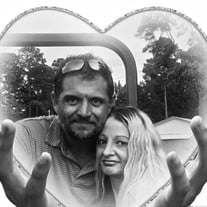 Jessie S. “Hootie” Sanders, Jr., age 40, of West Frankfort, IL and formerly of Hensley, AR, passed away at 2:50 p.m. on Saturday, March 5, 2022, at his home. He was born on January 3, 1982, in Little Rock, AR, the son of Jessie Sylvester Sanders, Sr. and Victoria Maria (Ramirez) Sanders. Jessie grew up in the Little Rock, AR, and was a graduate of Mills High School of Little Rock, AR. His working career was with Terminix Exterminating Company as a Supervisor. He was a member of Lone Pine Missionary Baptist Church of Hensley, AR. He is survived by his mother, Victoria Maria Williams of West Frankfort, IL; sister, Cassie Mayo and her children, Sebastian, Shyanne, Brock, Brooklyn and Chance of West Frankfort, IL; and aunt and uncle, Susie and Ronald Meredith; uncle and aunt, Lucian and Gayle Sanders; uncle, George Sanders and the many cousins he loved, other family members and friends. He was preceded in death by his wife, Shauna; son, Preston; father, Jessie Sylvester Sanders, Sr. and grandmother, Edith Rand. Arrangements have been entrusted to Stone Funeral Home, 1201 E Poplar St, West Frankfort, IL 62896. At this time there will no public services accorded. The family has requested for those who prefer, memorial contributions to be made to “Stone Funeral Home” to help the family with final expenses. Memorial contributions may be mailed in care of Stone Funeral Home, 1201 E Poplar St, West Frankfort, IL 62896. Memorial envelopes will be available at the funeral home. For additional information call the funeral home at (618) 932-2161

The family of Jessie Sylvester "Hootie" Sanders, Jr. created this Life Tributes page to make it easy to share your memories.