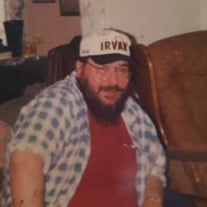 John D. Gross, age 56, of Zeigler, IL and formerly of West Frankfort, IL passed away with his family by his side at 8:35 p.m. on Saturday, March 3, 2018 at his home in Zeigler. He was born in on Thursday, March 16, 1961 in Chicago, IL the son of John D. and Pearl Jean (Drinnon) Gross. He worked on cars for years as a body man, acquiring the nick name “Body Man.” He loved to fish and spend time with his grandchildren. John was a big fan of the St. Louis Cardinals and loved to watched NASCAR races. He survived by his significant other of 43 years, Cheryl Spain of Ziegler, IL; daughter and son-in-law, Kacee (Gross) and Chad Schmitt of Waltonville, IL; son and daughter-in-law, Kris and Kathryn Gross of West Frankfort, IL; daughter, Kelli Gross, and significant other Max McKinley of Cahokia, IL; six grandchildren, Jonathan Darnell, Coby Schmitt, Candelyn Schmitt, Katrianna McKinley, Kiandra McKinley, and Marquez McKinley; two brothers and sisters-in law, J. D. and Teresa Gross and Edward and Lisa Gross, all of Crab Orchard, KY; sister, Ramona Brummett and Oma Randolph all of Crab Orchard, KY; brother, Junior Narvaez of Puerto Rico; two aunts, Fay Spence of Herein, IL and Irene Hendricks of Carterville, IL; the extended Spain family; caregiver Rachael Walls; several brothers and sisters-in-law; several nieces and nephews; other extended family members; and many friends. He was proceeded in death by his parents, John D. Gross and Pearl Jean (Drinnon) Gross; one brother, Levi Gross, and one sister, Jeanie Narvaez. Arrangements for John D. Gross have been entrusted to Stone Funeral Home, 1201 East Poplar St., West Frankfort, IL. The visitation will be from 12:00 p.m. until 1:00 p.m. on Friday, March 9nd, at the funeral home. The memorial service will follow at 1:00 p.m. on Friday, March 9, 2018, at Stone Funeral Home with Rev. Lee Jewett presiding. For those who prefer, memorial contributions may be made to “Stone Funeral Home” to help the family with final expenses and mailed in care of the funeral home. Memorial envelopes will be available at the funeral home. For additional information call the funeral home at 618-932-2161.

The family of John Dean Gross created this Life Tributes page to make it easy to share your memories.

Send flowers to the Gross family.