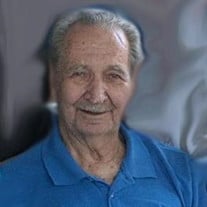 Joseph L. “Joe” Wittkamp, age 88, of West Frankfort, IL, passed away at 5:15 p.m. on Friday, October 4, 2019, at home in West Frankfort, IL. Joe was born on Monday, June 22, 1931, in Union Hospital in West Frankfort, IL, the son of Carl Robert and Blodwen (Coleman) Wittkamp. Joe grew up and attended school in West Frankfort and was a graduate of West Frankfort High School Class of 1949 and continued with his education for three years studying Agriculture at Southern Illinois University. Joe and June were members of First Baptist Church of West Frankfort and for many years attended Murdale Baptist Church of Carbondale, IL. Joe was united in marriage to Ester June (Gonzalez) Wittkamp on Sunday, June 10, 1951, in Ebenezer Church, located southeast of Thompsonville, IL in Saline County, and together they shared over 68 years of marriage until her death August 6, 2019. Joe served two years in the United States Army stationed at Fort Leonard Wood, MO and was honorably discharged, July 17, 1954. After being discharged from the army Joe farmed and was a truck driver for several years before he began his long career with the United States Postal Service in October of 1960 in Carbondale, IL as a Postal Clerk, where he remained until his retirement as a Postal Supervisor in December of 1989. He loved his family and extended family and always enjoyed the many times they spent together. The memories that have been created will now be cherished by those he leaves behind. Joe is survived by his sister, Johnnie Martha Blades of West Frankfort; one niece, Aaron Sue Tyner and husband, Kelly of Vincennes, IN, and; two nephews, Devin King and wife Tammy of Rose Bud, AR and Sean King and wife, Lisa of Greenup, IL; other extended family and many friends. He was preceded in death by his parents; wife, June Wittkamp, August 6, 2019, and two sons, David who passed away on October 7, 1985, and Joseph Richard who passed away on July 5, 1989. Arrangements for Joseph L. “Joe” Wittkamp have been entrusted to Stone Funeral Home, 1201 East Poplar Street, West Frankfort, IL. The graveside committal service will be at 2:00 p.m. on Sunday, October 13, 2019, next to his wife, June in Tower Heights Cemetery of West Frankfort, with Pastor Paul Hicks Pastor of Murdale Baptist Church of Carbondale, IL presiding. Those wishing to attend the graveside committal service should gather at Tower Heights Cemetery prior to 2:00 p.m. Military honors will be accorded at the graveside by members of the American Legion Post No. 1961 of Orient and American Legion Post No. 177 of Zeigler and members of the United States Army Funeral Honors Detail. For those who prefer, memorial contributions may be made to “The National Hemophilia Foundation” and mailed in care of Stone Funeral Home, 1201 East Poplar St., West Frankfort, IL 62896. Memorial envelopes will be available at the cemetery. For additional information call the funeral home at 618-932-2161.

The family of Joseph L. Wittkamp created this Life Tributes page to make it easy to share your memories.

Send flowers to the Wittkamp family.