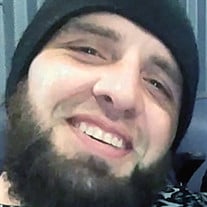 Joshua Michael “Josh” O’Leary, age 30, of West Frankfort, IL, passed away at 2:05 p.m. on Saturday, April 27, 2019, at his home. He was born on Sunday, October 30, 1988, in Providence Hospital of Kansas City, KS. His working career was in construction working for the J.L. Construction Company of Johnston City, IL. He also worked for the Southern Illinoisan Newspaper Company as a Bundler Hauler. In his spare time he enjoyed working on his Dodge Ram Pickup Truck, 4-Wheelers, Go-Carts and anything mechanical. After work he enjoyed playing video games and just winding down. He also was a wrestling fan and enjoyed watching wrestling matching on television. Josh loved spending time with his family and many friends and was loved by all who knew him. The many memories that have been created will now be cherished by those he leaves behind. He is survived by his 5 year old daughter, Emmalee Madison O’Leary of West Frankfort; 3 year old son, Tyler O’Leary of Benton, IL; mother, Sherry M. Hoffmann of Buffalo, MO; father, Karl Lee Fustin of West Frankfort; brother and sister-in-law, Cody Richard and Ruby Amanda O’Leary of DeSoto, KS; paternal grandmother and grandfather, Janis and Don Lamkin of Benton, IL; special uncle, Vance Michael Fustin of West Frankfort; special aunts, Pam Trowbridge of Kansas City, KS and JoAnn Green of West Frankfort, a host of other aunts, uncles, other extended family and many friends. Arrangements were entrusted to Stone Funeral Home, 1201 East Poplar Street, West Frankfort, IL. The visitation was from 5:00 p.m. until 8:00 p.m. on Thursday, May 2nd, at the funeral home. During the time of visitation a “Reflection of Life” DVD Memorial Tribute featuring special people, places and events in Josh’s life was presented to the family and friends. The funeral service was at 11:00 a.m. on Friday, May 3, 2019, with Rev. Roger Moore presiding. Comments of memory were presented by Josh’s grandparents Janis and Don Lamkin, father Karl Lee Fustin, his Uncle Vance’s wife Allison and friend Teresa Hutchens. The prelude and postlude musical selections were recorded musical selections. Special recorded vocal musical selections presented during the service were “Angel” by Sarah McLachlan, “Hole In the World” by The Eagles and “Go Rest High on That Mountain” by Vince Gill. Interment followed in Tower Heights Cemetery of West Frankfort. Pallbearers were Vance Fustin, Cody O’Leary, Josh Lazorchak, Brian Whitt, Adam Dill and Derrick Williams. Following the committal service at the cemetery the family and friends gathered at Janis and Don Lamkin’s home in Benton for a meal and continued time of fellowship and support. For those who preferred, memorial contributions were made to “Stone Funeral Home” to help with final expenses and mailed in care of Stone Funeral Home, 1201 East Poplar St., West Frankfort, IL 62896. Memorial envelopes were available at the funeral home. For additional information call the funeral home at 618-932-2161.

The family of Joshua Michael "Josh" O'Leary created this Life Tributes page to make it easy to share your memories.