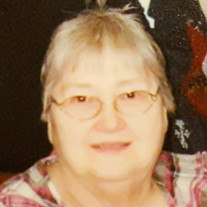 Juanetta Marie Gordon, age 77 of Benton and formerly of West Frankfort, IL passed away peacefully with her family by her side, at 8:30 a.m. Thursday, February 15, 2018, in Heartland Regional Medical Center in Marion, IL. She was born in Shelbyville, IL on Wednesday, January 1, 1941, the daughter of Sylvester “Tom” McClain and Edna Alberta (Yunker) Gordon. She grew up in the heart of central IL and attended Towerhill, Shelbyville, and Stew-Straws schools through her junior year and at 45 years of age attained her GED and continued her education at Rend Lake College where she earned her LPN. She spent many years as a nurse in two nursing homes in West Frankfort, one in Murphysboro, and one in Hawaii, then on to the Big Muddy Correctional Facility until she retired in 2000. She was a member of the Gospel Mission Church of Johnston City. In her spare time she enjoyed reading, knitting, playing cards with family and friends, playing video games and in years past enjoyed going fishing. She is survived by her daughter, Regina Mahan (John Gibbar) of Perryville, MO; two sons, Brian Hancock of Williston, ND and Leslie Hancock of Fairfield, IL; 8 grandchildren and 4 great-grandchildren; three sisters, Lenora (Evan) Willis of West Frankfort, Roxann (Chuck) Summers of Robinson, IL and Rita Mary (Carl) Mathis of Shelbyville, IL; four brothers, Benjamin (Karen) Gordon of Shelbyville, Richard (Jan) Gordon of Texas, Leonard Gordon of Shelbyville and Thomas Gordon of Arkansas; many nieces, nephews, cousins and other extended family members and many friends. She was preceded in death by her parents and one nephew, Walter McClain Gordon. Arrangements for Juanetta Marie Gordon have been entrusted to Stone Funeral Home, 1201 East Poplar St., West Frankfort, IL. According to her wishes she will be cremated with private graveside services at a later date. For additional information call the funeral home at 618-932-2161.

Juanetta Marie Gordon, age 77 of Benton and formerly of West Frankfort, IL passed away peacefully with her family by her side, at 8:30 a.m. Thursday, February 15, 2018, in Heartland Regional Medical Center in Marion, IL. She was born in Shelbyville,... View Obituary & Service Information

The family of Juanetta Marie Gordon created this Life Tributes page to make it easy to share your memories.

Juanetta Marie Gordon, age 77 of Benton and formerly of West...

Send flowers to the Gordon family.