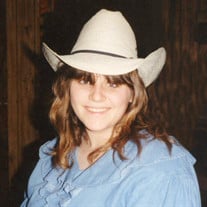 Julie A. Tyler, age 38, of Orient, IL passed away at 6:00 a.m. on Sunday, December 14, 2014, at home. Julie was born February 20, 1976 in West Frankfort, IL the daughter of Jack A. and Rose Mary (Garner) Joplin. She grew up and attended school in West Frankfort and was a member of the Christian Worship Center in West Frankfort. She was united in marriage to Chad Tyler in 1998 in West Frankfort, IL. She always kept busy caring for her family and her home and when time allowed she enjoyed reading, writing poetry and singing. She enjoyed the outdoors, fishing, tracking deer and four-wheeling. What was most important to her was her family and the times they spent together. She will be missed and remembered by all who knew and loved her. She is survived by her parents, Jack and Rose Mary Joplin of West Frankfort, IL; her husband, Chad Tyler of Orient, IL; daughter, Shaylie Tyler of Orient, IL and her friend, Chance Ogden; son, Dakota Tyler and companion, Hali Holland of Orient, Il; brother, Jason Joplin of West Frankfort, IL; one sister, Jeana Snethen and husband, Josh of West Frankfort, IL and seven others who were raised as sisters, Marissa Jackson and husband, Tony, Amanda Welch, Jessie Oxborough, Alicia Shelton, Chelsea Spears, Brittany Spears and Kailee Spears; niece, GraceLynn Snethen; nephew, DaKaden Snethen; other extended family members including aunts, uncles and cousins. She was preceded in death by her grandparents and her sister-aunt, Jessica Spears who she was raised with. Arrangements for Julie A. Tyler were entrusted to the Stone Funeral Home, 1201 East Poplar St., West Frankfort, IL. Visitation was from 5:00 p.m. until 7:00 p.m. on Wednesday, December 17th at the funeral home. During the time of visitation a “Reflection of Life” DVD Memorial Tribute featuring special people, places and events in Julie’s life was presented to the family and friends. The funeral service was at 2:00 p.m. Thursday, December 18, 2014, at Stone Funeral Home with Rev. Toedy Holley-Gray presiding and assisted by Jenell Brookhouse. Special recorded vocal musical selections presented during the service were “Holes In the Floor of Heaven” by Steve Warner, “I Can Only Imagine” by MercyMe and “Go Rest High on That Mountain” by Vince Gill. Burial followed in Denning Cemetery West of West Frankfort, IL. Pallbearers were John Wall, Deon Redmon, Shane Tyler, Chance Ogden, Daniel Burroughs and Josh Snethen. Following the committal service at the cemetery the family and friends gathered at the American Legion in Orient, IL for a meal and continued time of fellowship and support. For those who preferred, memorial contributions to help with final expenses were made to the family in care of “Chad Tyler”. Memorial contribution envelopes were available at the funeral home or were mailed in care of Stone Funeral Home, 1201 East Poplar St., West Frankfort, IL 62896. For additional information please contact the funeral home by calling 618-932-2161.

The family of Julie A. Tyler created this Life Tributes page to make it easy to share your memories.

Send flowers to the Tyler family.