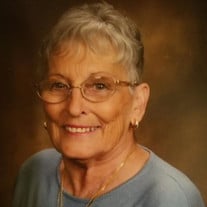 LaDonna Supancic, age 75, of West Frankfort, IL passed away at 10:45 a.m. on Saturday, November 4, 2017, in Herrin Hospital of Herrin, IL. She was born on Wednesday, July 1, 1942, on the farm in her grandmothers bed near Parrish, IL, the daughter of Buddie and Wanda June (Davis) Supancic. LaDonna was a graduate of Cabool, Missouri High School Class of 1960. After graduation, LaDonna traveled all across the United States and returned back to Cabool in 1970 and met her lifelong partner, Carol Turner, while working at the Lee Factory in Houston, MO. After Carol’s period of faithful service in the United States Army, they moved to West Frankfort, and LaDonna began working at the Mark Twain Boat Factory and later Boyd Brothers. After a period of time, she left Boyd Brothers and began working for the US Army Corps of Engineers at Rend Lake and retired after 20 ½ years of service. LaDonna was of the Protestant faith and a member of the American Legion Ladies Auxiliary of Orient, IL. She was a huge animal lover and was always bringing home abandoned and hurt dogs and cats. LaDonna and Carol both built and special building for the animals with a huge outdoor run and heated and air-conditioned inside. No animal when cared for by LaDonna and Carol ever had it better. LaDonna loved the outdoors and in 2008, her and Carol bought Yamaha 50 Scooters and started traveling all the back roads of Southern Illinois. But there were times they wanted to go a little faster or get on the highways so they bucked up and took and passed the test for the Illinois L License and both got Yamaha 125 Scooters. There was no holding them back after that, but they still loved traveling the back roads looking for wildlife. She was a giving person and later in her life she took up sewing and embroidery. She created many special quilts and handmade items that she would give as gifts to family and friends. LaDonna loved to get together with her family and many friends. She especially looked forward to her annual gathering in West Frankfort with Carol, Linda, Helen, Sandy and Laura. For several days they played “Phase 10” and “Chicken Foot Dominos.” Those she leaves behind will now cherish the many memories that have been created. LaDonna always considered herself blessed to have two wonderful families, hers and Carol’s. She is survived by her life long partner, Carol Turner of West Frankfort; brother, Ranold Supancic of Bloomfield, MO; three nephews, Greg Supancic and wife Rana of Mountain Grove, MO, Rick Supancic and wife Lisa of Lynchburg, MO and Mike Supancic and wife Sandy of Cabool, MO, a host of great nieces and great nephews, other extended family and many friends. Her parents, daughter, Felica Lynn, at age 3 months, and her special grandmother, Della Davis, preceded her in death. Arrangements for LaDonna Supancic were entrusted to Stone Funeral Home, 1201 East Poplar St., West Frankfort, IL. The time of visitation was from 11:00 a.m. to 12:00 noon on Thursday, November 9, 2017, at the funeral home. Following the time of visitation, the memorial service was at 12:00 noon with Rick Sullins presiding. During the service, Kecia Stevens read a special poem called “The Dash.” The prelude and postlude musical selections were recorded piano selections. Special recorded vocal musical selections presented during the service were “What A Wonderful World” by Louis Armstrong and “You Raise Me Up” by Josh Groban. After the service the family and friends gathered at the American Legion of Orient, IL for a meal and continued time of fellowship and support. For those who preferred, memorial contributions were made to “St. Francis Care Animal Shelter” and mailed in care of Stone Funeral Home, 1201 East Poplar St., West Frankfort, IL 62896. Memorial envelopes were available at the funeral home. For additional information please contact the funeral home by calling 618-932-2161.

LaDonna Supancic, age 75, of West Frankfort, IL passed away at 10:45 a.m. on Saturday, November 4, 2017, in Herrin Hospital of Herrin, IL. She was born on Wednesday, July 1, 1942, on the farm in her grandmothers bed near Parrish, IL, the daughter... View Obituary & Service Information

The family of LaDonna Supancic created this Life Tributes page to make it easy to share your memories.

LaDonna Supancic, age 75, of West Frankfort, IL passed away at...

Send flowers to the Supancic family.