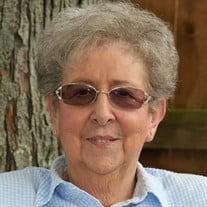 Lillian Rotramel, age 83, a lifelong resident of West Frankfort, IL, passed away peacefully at 9:29 a.m. on Tuesday, November 17, 2015, at her home. She was born in West Frankfort, IL on Sunday, December 27, 1931, the daughter of Francis Marion and Lena Vivian (Milligan) Odle. Lillian attended school in West Frankfort and was a graduate of West Frankfort High School Class of 1949. She was united in marriage to Jarret Esta Rotramel on Saturday, July 15, 1950, in Piggott, AR and together they shared over 58 years of marriage until his death on Friday, January 30, 2009. Lillian’s working career was with the State of Illinois Department of Veterans Affairs in the Benton and Harrisburg, IL offices for 22 years until her retirement. She has been active in the Franklin County Republican Party since the age of 18 and also in the Franklin County Republican Women’s Organization and was very proud of having been elected Frankfort Township Clerk since 1989, for 7 four year terms. She has been a member of the First United Methodist Church in West Frankfort since 1972, and for the last few years had also been attending with her family at the Heights Church of God also of West Frankfort. Lillian loved to cook, and was always looking to learn about new recipes by watching cooking shows on television and reading food and cooking magazines. She also enjoyed spending time with and going out to eat with her family at many of the area restaurants. The many memories that have been created will now be cherished by those she leaves behind. She is survived by her daughter and son-in-law, Marian Sue and John Smith and son and daughter-in-law, Jim and Glenda Rotramel all of West Frankfort, IL; three grandsons, Jason Smith and his wife Tracy of Johnston City, IL, Shane Smith and his wife Abby of Marion, IL and Jim Rotramel and his wife Natalie of Herrin, IL; great grandson, Drew Smith of Johnston City, IL, other extended family and many friends. She was preceded in death by her parents and husband. Arrangements for Lillian Rotramel were entrusted to the Stone Funeral Home, 1201 East Poplar St., West Frankfort, IL. Visitation was from 5:00 p.m. to 8:00 p.m. on Friday, November 20th at the Heights Church of God, located at 1418 East Clark Street, West Frankfort, IL. During the time of visitation a “Reflection of Life” DVD Memorial Tribute featuring special people, places and events of Lillian’s life was presented to the family and friends. The funeral service was at 11:00 a.m. on Saturday, November 21, 2015, also at the church with Rev. Bill Perry and Rev. David Estep presiding. The prelude and postlude musical selections were presented by pianist, Yolonde Peterson. Special vocal musical selections presented during the service by Kevin Cook were “There is a River” with recorded accompaniment and “What a Day That Will Be” accompanied by pianist, Marian Smith. Interment followed next to her husband in East Fork Cemetery east of West Frankfort, IL. Pallbearers were John Smith, Jason Smith, Shane Smith, Jimmy Rotramel, John Etherton and B.J. Crespi. Following the committal service at the cemetery the family and friends gathered back at the church for a meal and continued time of fellowship and support. For those who preferred, memorial contributions were made to the “Masonic Children’s Home”. Memorial contribution envelopes were available at the church or were mailed in care of Stone Funeral Home, 1201 East Poplar St., West Frankfort, IL 62896. For additional information please contact the funeral home by calling 618-932-2161.

Lillian Rotramel, age 83, a lifelong resident of West Frankfort, IL, passed away peacefully at 9:29 a.m. on Tuesday, November 17, 2015, at her home. She was born in West Frankfort, IL on Sunday, December 27, 1931, the daughter of Francis Marion... View Obituary & Service Information

The family of Lillian Rotramel created this Life Tributes page to make it easy to share your memories.

Send flowers to the Rotramel family.