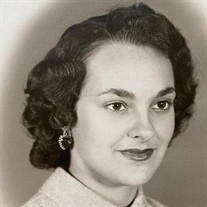 Linda L. Vaughn, age 82, of West Frankfort, IL, passed away peacefully with her family by her side at 4:15 p.m. on Saturday, May 23, 2020, at her home. She was born on Tuesday, August 3, 1937, at home in what was known as the Crenshaw Community in Williamson County, IL, the daughter of Orville and Grace L. (South) South. Linda was first united in marriage to Rawleigh Leon Beers for many years and this marriage was blessed with four children; Reba, Brenda, Michael and Paul. She later was united in marriage to Herbert G. Vaughn on Saturday, August 15, 1987, in Johnston City, IL, and together they shared nearly 18 years of marriage until his death on Monday, January 3, 2005. Her working career was with Norge Manufacturing Company of Herrin, IL, as a Punch Press Operator for 20 years until she retired in January of 1991. Linda was of the Protestant faith. In her spare time, she loved to hunt, fish and trap. Linda always had said she was a “Tom Boy” in her youth, living on the farm she raised ducks, horses and other farm animals. She loved the outdoors and enjoyed feeding and watching her birds, especially humming birds and cardinals, outside of her country home. She had a lot of Native American heritage on her father’s side, something she was very proud of, and she was always interested in all of the Native American history and tribal customs. She also had a very special pet Pit Bull she called “Sassy”. She is survived by her son, Michael Beers and companion, Terri Kimbro of West Frankfort, IL; two daughters and sons-in-law, Reba D. and Bill Barra of Johnston City, IL and Brenda and Mark Evans of Marion, IL; three granddaughters, Erica Saylor and husband, Jason of Johnston City, IL, Jennifer Novak and husband, Jason of Marion, IL and Jodi Havener and husband, Joe of Marion, IL; two grandsons, Brandon Davis and wife, Kari of Woodbury, MN and Chad Beers and his wife, Heather of Johnston City, IL; thirteen great grandchildren, Luke Lampley, Skye Beers, Samantha Beers, Gage Saylor and Maci Saylor all of Johnston City, IL, Graycie Havener, Gabriel Havener, Elsie Havener, Alayna Havener, Mason Novak and Bristol Novak all of Marion, IL, and Kyan Davis and Isla Davis both of Woodbury, MN; brother and sister-in-law, Jack and Brenda South of Johnston City, IL; sister-in-law, Audrey L. South of AL; former daughter-in-law, Patti Rowland of Johnston City, IL, several nieces, nephews, other extended family and many friends. She was preceded in death by her parents, both husbands; son, Paul Beers; two sisters, Louise Malone and Ruby Faye Haynes and two brothers, Orvel Mack and Frank South. Arrangements were entrusted to Stone Funeral Home, 1201 E. Poplar Street, West Frankfort, IL. DUE TO HEALTH CONCERNS RELATED TO THE COVID-19 VIRUS AND BY THE SIGNING OF EXECUTIVE ORDER BY THE ILLINOIS GOVERNOR, it was recommended funeral homes adhere to limit public gatherings within the funeral home to 10 or fewer people. The time of visitation was from 9:30 a.m. until 11:00 a.m. on Thursday, May 28, 2020, at the funeral home. Following the time of visitation, the funeral service was at 11:00 a.m. with Pastor Guy Webster presiding. Comments of memory were presented by granddaughter, Jennifer Novak. Special recorded vocal musical selections presented during the service were “What a Day That Will Be” by Southern Raised, “Lead Me Home” by Jamey Johnson and “When I Get Where I’m Going” by Brad Paisley and Dolly Parton. Interment followed in Simmons Cemetery east of Creal Springs, IL. The funeral procession made a special drive by of Linda’s home on the way to the cemetery. Pallbearers were Chad Beers, Jason Novak, Jason Saylor, Matt Beers, Luke Lampley and Deon Rogers. For those who preferred memorial contributions were made to “Hospice of Southern Illinois”. Memorial contributions envelopes were available at the funeral home or were mailed to the Stone Funeral Home, 1201 E. Poplar Street, West Frankfort, IL 62896. For additional information call the funeral home at 618-932-2161.

The family of Linda Lorene Vaughn created this Life Tributes page to make it easy to share your memories.

Send flowers to the Vaughn family.