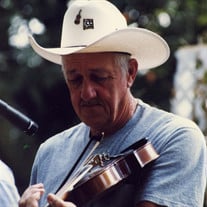 Lloyd D. “Boots” Shew, age 85, of Thompsonville, IL, passed away peacefully at his home with his family near on Saturday, February 1, 2020, at 9:15 p.m. Boots, as he was known by many, was born on November 10, 1934, at home in Franklin County, IL. He was the son of Herman and Ethel Louise (McFarland) Shew. His father passed away when he was very young. His mother remarried Chester Joe Waller. They along with his Grandparents Jarret and Lena McFarland raised him. Boots attended grade school in Akin, IL and later attended Thompsonville High School. He was united in marriage to Mary Lucile Jones on December 7, 1954 in Corinth, Mississippi. They shared over 65 years of marriage until her death on January 6, 2020. They were blessed with four children; Oscar, YVetta, Glenda and Greg. Boots and his wife owned and operated “Shew’s Drive-In '' in McLeansboro, IL, for several years. Later he began working for Elder Manufacturing Shirt Company of McLeansboro. He also worked for several Bit Companies in the area where he would rebuild drilling bits, known as being a “Bit Re-Tipper”. Later he and Lucile opened a restaurant in Thompsonville known as “The Wagon Wheel Cafe”, which they operated until they retired. Boots and his wife attended church at Plasters Grove Freewill Baptist Church of Thompsonville. They also attended Middle Fork-Salem Primitive Baptist Church near Benton, IL. He loved Bluegrass Music and was known as being an excellent “Fiddle Player” and over time had played with many groups in the area. He also loved traveling all over the Midwest attending and playing in many Bluegrass festivals. During the time when he was playing with the “Country Travelers” they were asked by the Smithsonian Institution in Washington DC to travel to Washington and play in the “American FolkLife Festival”. Their music was recognized by the Smithsonian and was registered in the Smithsonian Archives. In his spare time he enjoyed fishing, spending many hours outdoors on ponds and creek banks. Boots loved his family and always enjoyed the many times they all would be together. He was always interested in all of their many activities, especially those of his grandchildren and great grandchildren. The many memories that have been created will now be cherished by those he leaves behind. He is survived by four children, Oscar D. Shew and his wife Tawana, YVetta L. Arview and her husband Rob, Glenda G. Baker and Greg L. Shew and his wife Margaret all of Thompsonville; eight grandchildren, Denise Smith and her husband Kenny, Misty Stover and her husband Jamie all of Thompsonville, Jaime Erthall and her husband Brent of West Frankfort, Jared Mocaby and his wife Nichole of Crab Orchard, Janet Clark and her husband Adam of Marion, Steve Simpson of Benton, Joe Simpson and wife Christine of Carmi, and Jacob Langley and wife Amanda of Anna seven great grandchildren, Kenise Head and her husband Dakota, Kolby Smith and Emma Stover all of Thompsonville, Jalynn Rone of West Frankfort, Gracelynn and Riley Mocaby both of Crab Orchard and Victor Clark of Marion; sister, Velma Palmer and her husband Donnie of Thompsonville; brother-in-law, Sam Osborn of Thompsonville, numerous special nieces and nephews along with other extended family and many friends. He was preceded in death by his parents, wife, granddaughter, Angie McKinnies and sister, Patricia Osborn. Arrangements have been entrusted to Stone Funeral Home, 1201 East Poplar Street, West Frankfort, IL. The visitation will be from 11:00 a.m. until 1:30 p.m. on Thursday, February 6, 2020, at the funeral home. Following the time of visitation the funeral service will be at 1:30 p.m. with Elder Willie Huffine presiding. Interment will follow next to his wife in Plasters Cemetery located north of Thompsonville. For those who prefer, memorial contributions may be made to the “Plasters Cemetery Fund” and mailed in care of Stone Funeral Home, 1201 East Poplar St., West Frankfort, IL 62896. Memorial envelopes will be available at the funeral home. Those wishing additional information may contact the funeral home by calling 618-932-2161.

The family of Lloyd Dean "Boots" Shew created this Life Tributes page to make it easy to share your memories.

Send flowers to the Shew family.