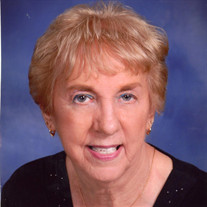 Lois Faye Mitchell, age 79, of West Frankfort, IL, passed away peacefully at the home of her son, Michael, at 7:10 a.m. on Sunday, February 18, 2018, in West Frankfort. She was born in Gary, West Virginia on Tuesday, April 19, 1938, the daughter of Sam and Louise (Kelly) Belcher. Lois was united in marriage to Coyet Leroy Mitchell, Sr. on Saturday, June 22, 1957, in West Frankfort, and together they enjoyed nearly 37 years of marriage until his death on Monday, May 2, 1994. Her husband served in the United States Navy, and while he was station in Millington, TN, Lois worked as a photographer for a studio on the base. Later, while still living in Millington, she began working for Wal-Mart. After her husband retired, they moved back to West Frankfort where she continued working for Wal-Mart, traveling and opening up new stores in the area. She eventually only worked at the Wal-Mart in Marion for several years until her retirement after 23 years of service. She was of the Baptist faith but recently had been attending a Trinity Methodist Church in West Frankfort with her sister. When she was younger, she enjoyed bowling, taking cruises, and traveling. She had traveled internationally to Japan and Africa and also visited many of the states, including Hawaii and Alaska. She enjoyed her family and looked forward to the many times they would be together. The many memories that have been created will now be cherished by those she leaves behind. She is survived by two sons, Michael Todd Mitchell and Coyet Leroy Mitchell, Jr. both of West Frankfort; seven grandchildren, John M.W. Mitchell and his wife Amanda of Sesser, IL, Steven T. Mitchell and his wife Destiny of West Frankfort, Kinley A. Mitchell of Valier, IL, Mykah J. Mitchell of Mcleansboro, IL, Coyet L. Mitchell, III of Flower Bluff, TX, Jacob H. Mitchell and his wife Alex of Creal Springs, IL, and Jessica E. Mitchell of Marion, IL; seven great grandchildren, Ian Mitchell, Jaxen Mitchell, Alexa Yancey, Jaleigh Page Mitchell, Braden Mullins, Tyler Mitchell, and Asher Coal Mitchell; sister, Dorothy Lyne of West Frankfort, other extended family members, and many friends. She was preceded in death by her parents, husband, brother, Michael Belcher, and sister, Peggy Barnes Dossett. Arrangements for Lois Faye Mitchell have been entrusted to Stone Funeral Home, 1201 East Poplar St., West Frankfort, IL. The time of visitation will be from 5:00 p.m. until 8 p.m. on Thursday, February 22nd at the funeral home. Interment will follow at a later date next to her husband in Denning Cemetery located west of West Frankfort. For those who prefer, memorial contributions may be made to “The American Cancer Society” and mailed in care of Stone Funeral Home, 1201 East Poplar St., West Frankfort, IL 62896. Memorial envelopes will be available at the funeral home. For additional information please call the funeral home at 618-932-2161.

The family of Lois Faye Mitchell created this Life Tributes page to make it easy to share your memories.

Send flowers to the Mitchell family.