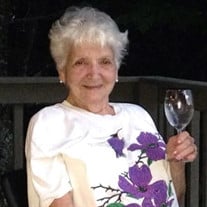 Lula Belle (Blades) Wall Tefertiller, age 85, of rural West Frankfort, IL, passed away peacefully with her family near, at 8:00 p.m. on Wednesday, April 13, 2022, at her home. She was born at home in the country on the family farm, located northeast of Johnston City, IL, the daughter of George A. and Marie (Kane) Blades. She was first united in marriage to Billy K. Wall on December 4, 1953, and this union was blessed with 3 children; Jaceson, Tracey and Tonya. She later was united in marriage to Rudy Tefertiller on October 2, 1992, and together they shared over 8 years of marriage until his death on November 21, 2000. Her working career over her lifetime included working for the U.S. Army Corps of Engineers Rend Lake in Administration for several years. She later worked for about 14 years at the Franklin-Williamson County Workshop as a Supervisor in the Shipping and Receiving Department. She last worked for about 9 years for the Bombardier Boat Company of Benton, IL, working on the factory line until she retired. She was of the Protestant faith and regularly attended church until her health declined. In her spare time, she enjoyed traveling and especially dancing. She was a very social person and loved being around people visiting and making new friends. She loved her family and was always interested in hearing about all the activities going on in their lives. The many memories that have been created will now be cherished by those she leaves behind. She is survived by two sons, Jaceson Wall of West Frankfort and Tracey Wall and wife, Robin of Daphne, AL; daughter, Tonya Wall of West Frankfort; five grandchildren, April Wall, Dustin Wall and wife, Erin of Johnston City, IL, Clint Wall of Madison, AL, Alaina Wall of Covington, LA and Dylon Quindry and wife, Grace of Christopher, IL; eight great grandchildren, Carter Wall, Evie Wall, Cadynce Wall, Isabella Wall, Gianna Galiano, Liam Wall, Layton Quindry and Lawson Quindry; sister and brother-in-law, Ruth Ann and Jerry Spears of West Frankfort; two sisters-in-law, Barbara Jane Blades and Johnnie Martha Blades both of West Frankfort, numerous nieces and nephews who loved her and she loved dearly, other extended family and many friends. She was preceded in death by her parents, both husbands; six brothers, Stanley, Oakley, Lindell, Donald John D. Blades and Jack D. Blades and two sisters, Mary Ellen Carlson and Emma Elizabeth Cogdill. Arrangements are entrusted to Stone Funeral Home, 1201 East Poplar Street, West Frankfort, IL. The visitation will be from 5:00 p.m. to 7:00 p.m. on Tuesday, April 19, 2022, at the funeral home. Following the visitation, a “Celebration of Life Service” will be at 7:00 p.m., with members of Lula’s family presiding. For additional information call the funeral home at 618-932-2161.

Lula Belle (Blades) Wall Tefertiller, age 85, of rural West Frankfort, IL, passed away peacefully with her family near, at 8:00 p.m. on Wednesday, April 13, 2022, at her home. She was born at home in the country on the family farm, located... View Obituary & Service Information

The family of Lula Belle (Blades) Wall Tefertiller created this Life Tributes page to make it easy to share your memories.