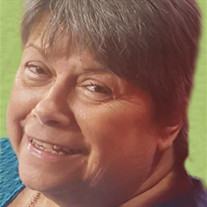 Lynn Ann Hill, age 62, of West Frankfort, IL, passed away peacefully with her family by her side at 5:13 p.m. on Monday, January 20, 2020, at her home. She was born on Monday, September 16, 1957, in Williamsburg, Virginia, the daughter of William Alderson Schmidt and Carol Ruth (Wentworth) Schmidt, Syers. Lynn attended school in West Frankfort and was a graduate of West Frankfort High School Class of 1976. She was united in marriage to Rickey Lee Hill on Saturday, April 10, 1976, in the First Baptist Church of West Frankfort, and to this union four children were born; Lester, Richard, Alecia and Courtney. Lynn’s working career began at an early age working at the Chicken-Quick Restaurant, located in the Heights area of West Frankfort, for about 3 years until her marriage. Then for a period of time she remained at home raising her family and managing her home. As her children got older she began a long career working at Wal-Mart in Benton, IL, for about 30 years until her retirement in October of 2019. She was of the Protestant faith. In her spare time she enjoyed playing bingo, was an avid St. Louis Cardinal fan and was a faithful supporter of West Frankfort Athletics. Her most important part of her life was her family and enjoyed the many times they all would be together. She was always interested in all of their many activities, especially those of her grandchildren, and never missed any of her grandchildren’s sporting activities. The many memories that have been created will now be cherished by those she leaves behind. She is survived by two sons and daughters-in-law, Lester Keith Hill and wife, Shannon of Benton and Richard Lee Hill and wife, Tricia of Fairview Heights, IL; two daughters and one son-in-law, Alecia Ann Coffey and husband, Erik of West Frankfort and Courtney Lynn Russotto of West Frankfort; ten grandchildren, Chloe Hill, Camdyn Hill, Presley Hill, Tyler Hill, Natalee Hill, Nolan Hill, Xander Coffey, Hannah Coffey, Braiden Russotto and Graison Russotto; her eleventh grandchild, Hunter is expected to be here on April 3, 2020; three sisters, Mary “Mamie” Melvin and husband, Dr. Paul “Butch” of Marion, IL, Tammy Frauenfelder of Marion and Sylvia Davidson and Rod Studley of Vienna, IL; brother, Bill Schmidt and wife, Penny of West Frankfort; three sisters-in-law, Lisa Thomas and husband, Mike of West Frankfort, Beth Eisenhauer and husband, Rex of West Frankfort and Leslie Hampleman and husband, Matt of West Frankfort, a host of nieces and nephews, other extended family; her faithful Jack Russell Terrier companion, Brutie and many friends. She was preceded in death by her parents and granddaughter, Nova Russotto on October 4, 2015. Arrangements were entrusted to Stone Funeral Home, 1201 East Poplar Street, West Frankfort, IL. The time of visitation for family was from 4:00 p.m. to 5:00 p.m. on Thursday, January 23rd at the funeral home. Following the time of family visitation, the time of visitation for friends of the family was from 5:00 p.m. until 8:00 p.m. During the time of visitation a “Reflection of Life” DVD Memorial Tribute featuring special people, places and events in Lynn’s life was presented to the family and friends. Visitation resumed from 9:00 a.m. until 11:00 a.m. on Friday, January 24, 2020, also at the funeral home. Following the time of visitation the funeral service was at 11:00 a.m. with Pastor Guy Webster presiding. Comments of memory were presented by Lynn’s son, Richard. The prelude and postlude musical selections were recorded instrumental selections. Special recorded vocal musical selections presented during the service were “O Master Let Me Walk With Thee” by Susan Mack and Ellen Hanna, “I Can Only Imagine” by MercyMe, “I Won’t Go” by Rascal Flats, “Supermarket Flowers” by Ed Sheeran and “Because You Loved Me” by Celine Dion. Interment followed in Tower Heights Cemetery of West Frankfort. Pallbearers were Lester Hill, Richard Hill, Erik Coffey, Matt Hampleman, Guy Melvin and Rex EisenHauer. Following the committal service at the cemetery the family and friends gathered at Lynn’s home for a meal and continued time of fellowship and support.. For those who preferred, memorial contributions were made to either “Redbird Athletics Program” and/ or “American Cancer Society” and mailed in care of Stone Funeral Home, 1201 East Poplar St., West Frankfort, IL 62896. Memorial envelopes were available at the funeral home. For additional information call the funeral home at 618-932-2161.

Lynn Ann Hill, age 62, of West Frankfort, IL, passed away peacefully with her family by her side at 5:13 p.m. on Monday, January 20, 2020, at her home. She was born on Monday, September 16, 1957, in Williamsburg, Virginia, the daughter of William... View Obituary & Service Information

The family of Lynn Ann Hill created this Life Tributes page to make it easy to share your memories.

Send flowers to the Hill family.