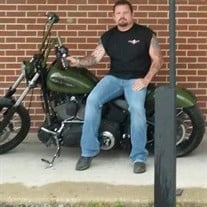 Mark Alan Holtz, age 36, of West Frankfort, IL and formerly of Irving, IL, died as the result of a motorcycle accident Sunday, May 24, 2015. Mark passed away at 1:15 p.m. Monday, May 25, 2015 in Barnes-Jewish Hospital in St. Louis, MO. He was born on Friday, February 23, 1979, in DuQuoin, IL the son of William Howard and Sue (Tucker) Holtz. Mark grew up in West Frankfort, IL where he attended school and graduated from West Frankfort High School Class of 1997. He was a coal miner for the Patton Coal Mine in Hillsboro, IL and was the former owner of E Z Street Bar and Grill in Taylor Springs, IL. Mark was a Harley Davidson motorcycle enthusiast and took part in numerous poker runs and enjoyed riding with his friends. He enjoyed working on motorcycles and classic cars and owned a 1969 Cornet R/T. The many memories that have been created will be cherished by those he leaves behind. He is survived by his mother, Sue Holtz of Freeman Spur, IL; his son, Cody Holtz and his mother, Joni Holtz of Crab Orchard, IL; two daughters, Shay Holtz and Faith Holtz and their mother, Johanna Holtz of Irving, IL and close friend, Shannon Holder (Holtz) of Mulkeytown, IL; two sisters and brothers-in-law, Crystal and Phillip Glenn and Lori and Chuck Watkins all of West Frankfort, IL; three nieces, Shannon and Sarah Glenn of West Frankfort, IL and Amber Williams of Herrin, IL; three nephews, William Glenn of West Frankfort, IL, Eric Williams of Herrin, IL and Steven Henderson of Stiritz, IL, other extended family members and many friends. He was preceded in death by his father, William Howard Holtz and his maternal and paternal grandparents. Arrangements for Mark Alan Holtz have been entrusted to the Stone Funeral Home, 1201 East Poplar St., West Frankfort, IL. Visitation will be from 12:00 noon until 3:00 p.m. Saturday, May 30th at the funeral home. Following the time of visitation the funeral service will be at 3:00 p.m. Saturday, May 30, 2015, at Stone Funeral Home with Rev. Curtis Smith presiding. For those who prefer, memorial contributions may be made to “Stone Funeral Home” to assist the family with final expenses. Memorial contribution envelopes will be available at the funeral home or may be mailed in care of Stone Funeral Home, 1201 East Poplar St., West Frankfort, IL 62896. For additional please contact the funeral home by calling 618-932-2161.

The family of Mark Alan Holtz created this Life Tributes page to make it easy to share your memories.

Send flowers to the Holtz family.