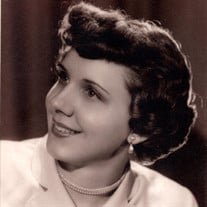 Fortified with the Sacraments of the Holy Mother Church, Mary Lou Sakonyi, 92 of West Frankfort, Illinois, died peacefully May 3, 2021. She was born August 5, 1928 in West Frankfort, Illinois to John and Anna (Urban) Bluyus. Mary Lou was a devoted mother of Charles Sakonyi, Martha Eidam, Theresa (Jim) Renik, Susan (Roy) Mayo, and Dianne Deck (Tom Palazzolo). She was an adoring grandmother of Kathryn Renik, Mark Eidam, Tim Mayo, Stephen Mayo, Anna Deck, Evan Deck, and Eric Deck. She was a loving aunt of several nieces and their families. Mary Lou was preceded in death by her parents; husband, Frank Sakonyi; sister, Rose Ann Pollock; and infant daughter, Rosemary. She was a lifelong member of St. John the Baptist Catholic Church and volunteered and participated in various church and school organizations. Mary Lou and Frank were a part of the original Orient American Legion “Dumpling Gang,” cooking chicken and dumplings to help raise funds to build a new Orient City Hall. Mary Lou was also awarded the first St. John’s Alumni Award for her meticulous research and work on collecting St. John’s School graduation pictures and information from the first graduation class in 1921 through 2011. Her collection is on permanent display in the school. The family of Mary Lou expresses their appreciation to the many staff members at Reflections Memory Care of Carterville and Hospice of Southern Illinois in the care and support of her. A Funeral Mass was celebrated in memory of Mary Lou on Saturday, May 29, 2021, at 10 AM at St. John the Baptist Catholic Church, West Frankfort, with Rev. Dr. Eusebius Mbidoaka officiating. As the hearse arrived at the church and the service concluded Mary Lou’s daughter, Theresa presented the “Tolling of the Bells." Son, Charles carried the urn into the church and grandson, Mark Eidam carried the urn out of the church and at the cemetery from the hearse to the grave. Music Director, Debra DeGorcia and members of the St. John’s Choir presented the music during the Mass. Grandson, Stephen Mayo presented the “1st and 2nd Readings” and niece, Vivian Mahaney presented the “Responsorial Psalms.” Grandchildren Kathryn Renik and Tim Mayo brought the gifts for “Holy Communion.” Burial followed in St. John’s Catholic Cemetery. Visitation was held from 4:00 PM - 7:00 PM on Friday, May 28, 2021, at Stone Funeral Home in West Frankfort, Illinois with the recitation of the Holy Rosary at 7:00 PM by daughter, Martha Eidam. During the time of visitation, a “Reflection of Life” DVD Memorial Tribute featuring special people, places and events in Mary Lou’s life was presented to the family and friends. Memorial donations were made to St. John's School or the West Frankfort Public Library. Envelopes were available and accepted at the funeral home. Following the committal service at the cemetery the family and friends gathered at the Franklin County Country Club for a meal and continued time of fellowship and support. For additional information call the funeral home at 618-932-2161.

The family of Mary Lou Sakonyi created this Life Tributes page to make it easy to share your memories.

Fortified with the Sacraments of the Holy Mother Church, Mary...

Send flowers to the Sakonyi family.