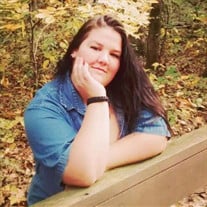 Melissa “Sweet Pea” Pace, age 27, of West Frankfort, IL, passed away suddenly at 1:20 a.m. on Thursday, September 22, 2016, in St. Mary’s Hospital of Kankakee, IL. She was born on Thursday, June 15, 1989, in Murray, KY the daughter of Michael Barry and Deena Loraine (Wilcox) Pace. Melissa has lived in several different states including Kentucky, Texas, Florida, Indiana, Georgia and for the last 14 years in West Frankfort. Earlier in her lifetime she worked as an Independent Home Caregiver in the West Frankfort and Benton area. She currently was working for Wal-Mart in Benton, IL in their Deli Department until her health declined. Melissa was of the Baptist faith and had attended several of the Baptist churches of the area. In her spare time she enjoyed doing crafts, being around animals especially horses, listening to music, spending time in the outdoors and hunting. She harvested her first deer last season in 2015. Melissa loved spending time with her family and many friends and the memories that have been created will now be cherished by those she leaves behind. She is survived by her mother and step-father, Dee and David Mayberry; brother, Mike Pace; nephew, Mason Michael Pace and step grandfather, Paul Mayberry all of West Frankfort, other extended family and many friends. She was preceded in death by her maternal grandparents, Daniel and Dorothy Wilcox and paternal step grandmother, Delores “Dee” Mayberry. Due to the current construction at the Stone Funeral Home in West Frankfort, arrangements for Melissa “Sweet Pea” Pace were entrusted to Wilson-McReynolds Funeral Home, 900 N. Court St., Marion, IL. The visitation was from 4:00 p.m. until 7:00 p.m. on Monday, September 26th, at the funeral home. During the time of the visitation a “Reflective of Life” DVD Memorial Tribute featuring special people, places and events in Melissa’s life was presented to the family and friends. The funeral service was at 11:00 a.m. on Tuesday, September 27, 2016, with Rev. Curtis Smith presiding. Comments of memory were also presented by Lois Gaddis, Debbie Pinkston, Amanda Hartline, Susan Dacy and Shaylyn Gass. The prelude and postlude musical selections were recorded piano selections. Special recorded vocal musical selections presented during the service were “Fight Song” by Rachel Platten, “Goodbye’s” (The Saddest Word) by Celine Dion, “I Won’t Let You Go” by Rascal Flatts, “If I Die Young” by Band Perry and “Go Rest High on That Mountain” by Vince Gill. Interment followed in Tower Heights Cemetery of West Frankfort. At the cemetery a special recorded musical selection “Jealous of the Angels” by Donna Taggart was presented. Pallbearers were Mike Pace, Ryan Gaddis, Bob Gaddis, Amanda Hartline, Robby Gaddis and Susan Dacy. The family requested for those who prefer, memorial contributions may be made to “Wilson-McReynolds Funeral Home” to help with expenses, and mailed in care of Wilson-McReynolds Funeral Home, P.O. Box 370, Marion, IL 62959. Memorial envelopes were available at the funeral home. For additional information please contact Wilson-McReynolds Funeral Home by calling 618-993-2131.

The family of Melissa Maye Daniele "Sweet Pea" Pace created this Life Tributes page to make it easy to share your memories.